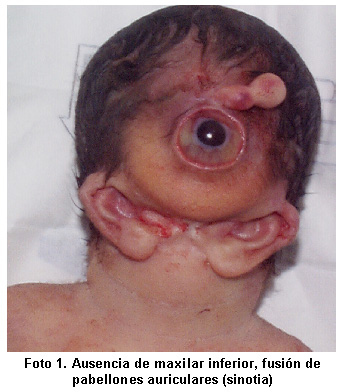 It would be interesting someday to make a list of all the ancient tales and legends that can be explained by misinterpretations or mythologizing of rarities of nature and medicine. The unicorn was created to explain the narwhal's horn. Giants in Greek legend were imagined as the explanation for dinosaur femurs and other large fossilized bones. Conjoined twins may have stimulated ideas of Indian gods or various monsters.

The above photo shows an anomaly that occurred in a newborn in Columbia; the full report is here, in Spanish. It's a case of agnathia [no jaw] holoprosencephaly complex. If (probably when) it occurred in antiquity, may well have inspired the legend of Cyclops. There is another possible origin of the legend:


...prehistoric dwarf elephant skulls – about twice the size of a human skull – that may have been found by the Greeks on Crete and Sicily... the large, central nasal cavity (for the trunk) in the skull might have been interpreted as a large single eye-socket. Given the inexperience of the locals with living elephants, they were unlikely to recognize the skull for what it actually was... 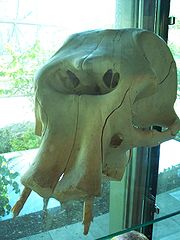