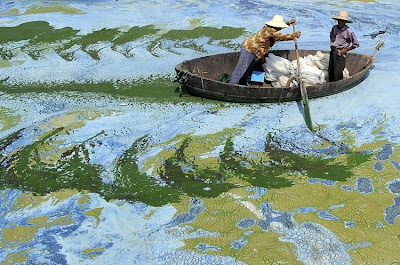 Fishermen rowed a boat in the algae-filled Chaohu Lake in Hefei, Anhui Province, China, Friday. The country has invested $7.4 billion toward the construction of 2,712 projects for the treatment of eight rivers and lakes. (Jianan Yu/Reuters)

I found this photo without context, and could not locate a site for it with a TinEye reverse image search. I think I found it at Izismile, and they typically post recent photos, so perhaps somewhere there's a current story to explain the situation.

The two ?southeast Asians? are in an oval wooden vessel (?coracle), oaring their way through what appears to be a sea of paint. Algae can certainly clog bodies of water, but this stuff appears to be almost cracked in the foreground. It's certainly not Homer's "wine-dark sea."

It would actually be an attractive color composition if it didn't have what is almost certainly a tragic explanation. If anyone has seen this elsewhere and knows the source/explanation, please let me/us know.