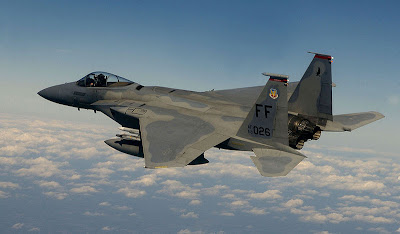 The March issue of The Atlantic had a piece by Mark Bowden detailing American military air superiority and the complexities of maintaining this advantage. The key factor is to have skilled pilots.

Balance, coordination, reaction time, a feel for the airplane, gunnery, the ability to calmly perform complex aerobatic maneuvers while under fire, a talent for thinking and acting quickly even while upside down or tumbling or out of control—these were all vitally important. But the paramount skill, [Japan WWII ace Saburo] Sakai recalled, was something the recruits had at the start: exceptional vision.

All of the young pilots had been selected for their perfect eyesight, but even more important was how broadly they could see, how wide a horizon they commanded, and how quickly they could focus in on the faintest off-center visual cue. They competed to locate stars in daylight. Sakai wrote:

"Gradually, and with much more practice, we became quite adept at our star-hunting. Then we went further. When we had sighted and fixed the position of a particular star, we jerked our eyes away ninety degrees, and snapped back again to see if we could locate the star immediately. Of such things are fighter pilots made."

Then, you need to place the pilots inside top-notch jet fighters:

The F‑15, the backbone of America’s air power for more than a quarter century, may just be the most successful weapon in history. It is certainly the most successful fighter jet. In combat, its kill ratio over more than 30 years is 107 to zero. Zero. In three decades of flying, no F‑15 has ever been shot down by an enemy pane—and that includes F‑15s flown by air forces other than America’s.

The practical effect of this air superiority is stunning:

The Air Force fears that the dominance of U.S. airpower has been so complete for so long that it is taken for granted. The ability of the United States to own the skies over any battlefield has transformed the way we fight. The last American soldier killed on the ground by an enemy air attack died in Korea, on April 15, 1953.

But the somewhat ironic corollary is that since no enemy forces have been able to challenge American air power, the actual combat experience of pilots is modest compared with those of previous eras:

When Rodriguez retired two years ago from the Air Force as a colonel, his three air-to-air kills (two over Iraq in 1991 and one over Kosovo) were the most of any American fighter pilot on active duty. That number may seem paltry alongside the 26 enemy planes downed by Eddie Rickenbacker in World War I, or the 40 notched by Richard Bong in World War II, or the 34 by Francis Gabreski across World War II and Korea. Rodriguez’s total was two shy of the threshold number for the honorific ace, yet his three made him the closest thing to an ace in the modern U.S. Air Force.

Much more at the link re the computerized electronic complexity of the F-15, the rising capabilities of competitive air forces, and the immense cost of the F-15s putative replacement, the F-22. Lots of "shock and awe" information in this piece.