The face of St. Paul - revealed by a laser 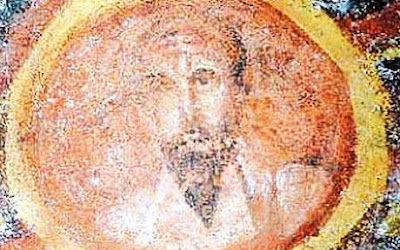 While restoring the Roman catacomb of St. Thekla, archaeologists discovered a fresco dating to the 4th century. Using a laser to remove centuries of grime, they discovered the recognizable face of St. Paul.

St Thekla was a follower of St Paul who lived in Rome and who was put to death under the Emperor Diocletian at the beginning of the 4th Century and who was subsequently made a saint but little else is known of her.

...the pictures are all covered with limestone which was covering up much of the artwork and so to remove it and clean it up we had to use fine lasers.

The traditionally-accepted story of St. Paul is that he converted from Judaism to Christianity because while travelling on the road to Damascus a brilliant light shone in his face and temporarily blinded him.

"On that journey as I drew near to Damascus, about noon a great light from the sky suddenly shone around me... Since I could see nothing because of the brightness of that light, I was led by hand by my companions and entered Damascus..."

The current event and the historic one form an interesting juxtaposition...