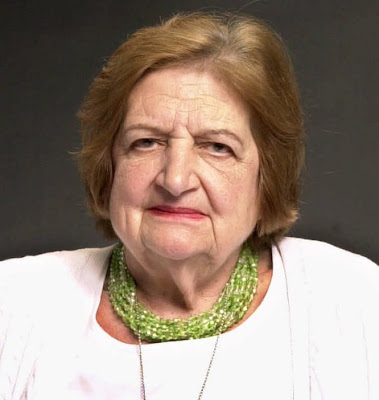 The oldest of old-timers here at TYWKIWDBI may remember my post from April of last year - "Flowers for Helen Thomas." If you're not familiar with this remarkable journalist, please read my previous post. I wrote that to support a Reddit solicitatiion for donations for flowers for her when she was the only member of the White House press corps to challenge President Bush on a controversial topic.

Yesterday, President Obama addressed the hot topic of Neda, the young Iranian woman who was shot and killed during the protests in Teheran. Glenn Greenwald describes what happened next:

As Obama was answering -- attesting to how "heartbreaking" he found the video; how "anybody who sees it knows that there's something fundamentally unjust" about the violence; and paying homage to "certain international norms of freedom of speech, freedom of expression" -- Helen Thomas, who hadn't been called on, interrupted to ask Obama to reconcile those statements about the Iranian images with his efforts at home to suppress America's own torture photos ("Then why won't you allow the photos --").

The President quickly cut her off with these remarks:

THE PRESIDENT: Hold on a second, Helen. That's a different question. (Laughter.)

The White House Press corps loves to laugh condescendingly at Helen Thomas because, tenaciously insisting that our sermons to others be applied to our own Government, she acts like a real reporter...

Exactly right (boldface added by me). People do laugh at Helen Thomas because she is almost 90 years old and dares to speak truth to power. She did not bow down before the regal aspects of the Bush presidency, and she does not fawn before Obama.

There's more discussion at the Greenwald column, and a less focused discussion thread at Reddit.

She probably does deserve more flowers. At this point it's not clear whether anyone at Reddit will step forward to implement the idea as someone did last time; if they do (or if a major blog like the Daily Dish takes up the cause), I'll post the relevant info at TYWKIWDBI.