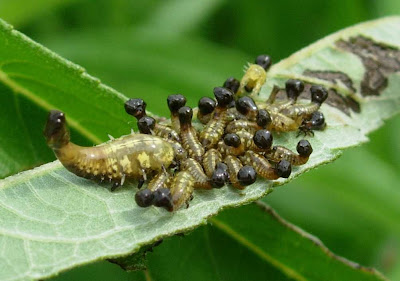 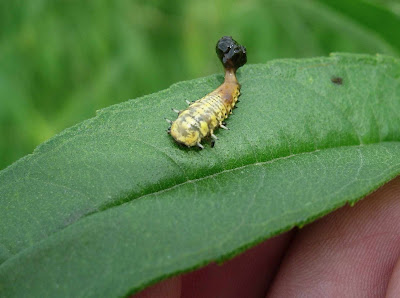 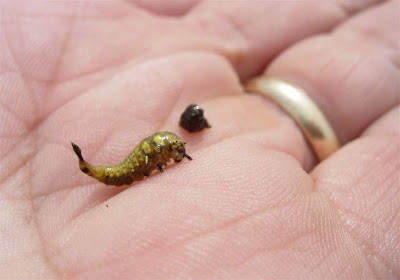 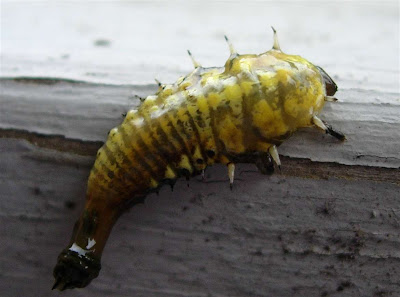 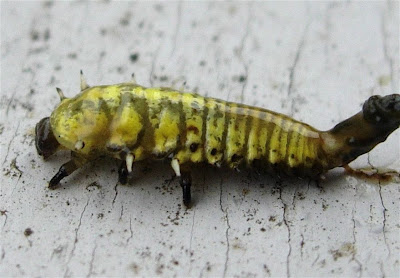 I was hiking this morning at the Cherokee Marsh conservation park with members of the Southern Wisconsin Butterfly Association. On the leaves of what I believe were Canada Goldenrod we encountered an abundance of critters that none of us recognized. Some were clustered in groups (top photo) on the underside of leaves; others were wandering solo. The second photo shows one with a large "club" at the end of its tail. When I put him on my hand, the "club" fell off, and I felt momentarily bad... until I got home and discovered what it was...

These are obviously not caterpillars; the most familiar creature they resemble are the larvae of ladybugs. After further searching I decided these are the larvae of the "ragweed leaf beetle" (Zygogramma suturalis). The adult is a handsome, colorful beetle. But these youngsters are even more interesting. Those "clubs" on the ends of their tails are collections of feces which they wave about to discourage predators.

After I brought one home I was able to get more detailed pictures. At first I thought I was having difficulty focusing the lens, but the fourth photo above shows that the body is covered by a layer of slime, which presumably has some toxicity to insectivores, or at least must taste dreadful. Protruding through the slime are a series of lateral spikes.

Look at the defense mechanisms this little fellow has - a hard carapace, probably the ability to roll into a ball like a pillbug (I didn't challenge him), with a slimy covering penetrated by spikes (reminiscent of the testudo (turtle) formation used by the Roman legions). Top that all off with a ball of feces waved in the air, and you can't help but marvel at what millions of years of evolution can achieve.

It looks to me like the stegasaurus didn't disappear - it just shrank in size.