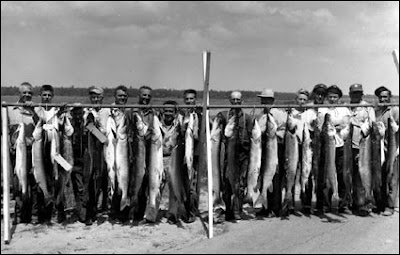 For Minnesotans of a certain age who live or vacation "up north," this event was legendary. The Minneapolis newspaper reposts this account:

The little town of Federal Dam, Minn., where Leech Lake river empties into [sic - exits from] Leech lake, is wild with excitement.

Since Saturday, huge muskies from 15 to 43 pounds have been on a rampage. No one can explain why – not even state fisheries bureau biologists.

The action started, quite by accident, Friday afternoon. From then until noon Tuesday a total of 83 big muskies have been landed.

They were hitting anything and everything...

The fantastic story goes back to last Friday afternoon when Mr. and Mrs. Al Storer went out fishing walleyes on nearby Boy river. Mrs. Storer had a minnow and spinner walleye hookup. But a muskie estimated at 25 pounds took it. She lost the fish when it got near the boat.

That evening they drove over to Merle Wescott’s landing below Federal Dam on Leech Lake. They were fishing for walleyes again. But they got two muskies instead.

Next day, Saturday, there were back on Leech with Morris Cohen and Art Green, both of Chicago. The four of them got nine more muskies. Westcott, his son, father and a cousin also were out. They got five.

That started the muskie rush. The word passed like a prairie fire out of control.

“It was like a dream,” Mrs. Storer said today. “You could see those big muskies lying right on top of the water.

“There were boats everywhere and in every one somebody was landing a big muskie or playing one at the end of his line. They were leaping all over the place.”

In the summer of '55 our family had a cabin on Leech Lake; I don't believe we participated in the "fever," but the fish were displayed in windows on ice downtown. For those unfamiliar with this particular fish, a muskellunge is a type of pike better known as a sport fish than as an "eatin' fish." My mom once landed a 30-pounder and now about 50 years later is still thrilled by memories of the event.