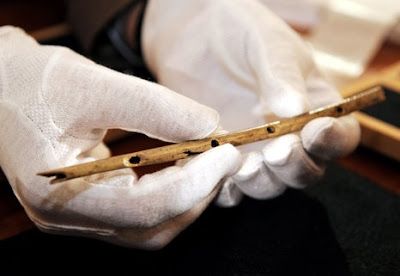 The qualifying phrase "handmade" is necessary because there is speculation that early man might have created musical notes by striking stalactites or "singing stones." The instrument above is quite obviously a flute, and it is about 35,000 years old; previous claims of flute discoveries have been dismissed as being bones punctured by carnivore canine teeth. This one appears valid.

The data were reported online yesterday at Nature. A longer description is posted at MSNBC's Cosmiclog:

In all, researchers report finding the fragments of four flutes at two excavations in an area of southwestern Germany known as Swabia. Three of the sets of fragments were carved from mammoth ivory, but the real prize is a nearly complete flute hollowed out from the bone of a griffon vulture. That specimen was found in the Hohle Fels cave, just 28 inches (70 centimeters) away from the spot where the prehistoric Venus... was found.

The figurine's discovery was announced in May, but both finds were actually made last September. "First came the Venus, and a couple of weeks later came the flutes," Conard said.

When assembled, the vulture-bone flute is about eight and a half inches long (21.8 centimeters long) and boasts five finger holes. There are fine lines cut into the bone around the holes, suggesting that the flute's maker was calibrating the holes' placement to produce the nicest tones. One end of the flute is cut into a V shape, and the musician probably blew into that side of the flute. The researchers assume that an inch or two of the flute's far end is missing.

You can listen to an MP3 of a replica flute being played.