Is the Republican party dying? 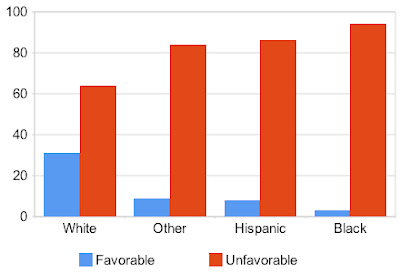 The graph above displays the favorable/unfavorable views of the Republican party, sorted by race. The data come from a telephone survey of 2400 adults conducted by Daily Kos, where the primary data are displayed. The tabular data were transformed into the above graph by Yglesias.

Having said that, these are still dreadful metrics for the Republicans. I certainly don't want our country to be dominated by one party, because absolute power corrupts absolutely. Perhaps we can hope that the intelligent, sensible Democrats will split from the stupid, irrational Democrats.