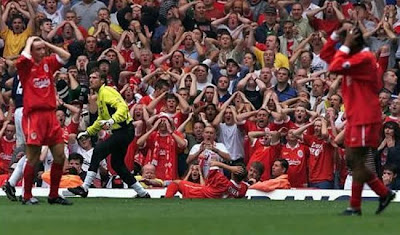 I'm not sure what it's called, or even if it does have a name, but it is familiar to everyone - both hands clasped to the top of the head - seen most often at sporting events (as shown above). I wonder where the gesture came from; it now seems to be broadly cross-cultural, if not universal. Do aboriginal people, or others without access to television broadcasting express frustration/disappointment in a similar fashion?

I thought maybe it could have arisen at sporting venues because there the gesture for victory or success or a goal is often both hands raised skyward - whence the collapse onto the head for a failure might be a logical extension.

I'm not expecting an answer, but any speculation or relevant observations would be welcome.

While (fruitlessly) researching this, I discovered that Wikipedia has a list of gestures. Single-hand gestures, two-handed ones, gestures made with other body parts. Browsing the list I found the eminently bloggable "anasyrma," but there appears to be much more to explore there.