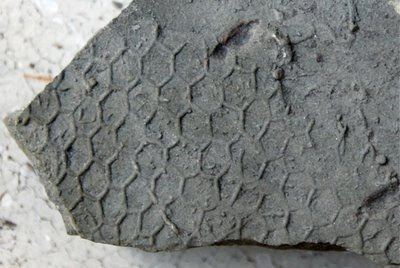 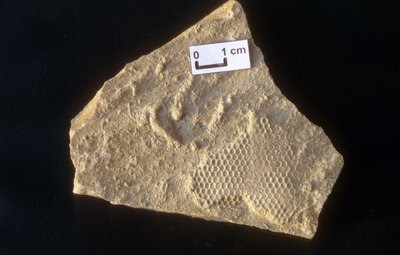 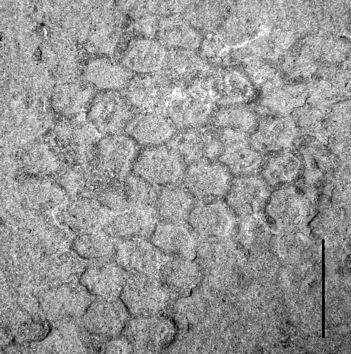 The pattern above is a "trace fossil" - a fossil of an activity, rather than of an organism. Footprints and tail-drags preserved in mud are trace fossils. Examples such as the ones above are referred to as "paleodictyon" (I'm not sure re the dictyon part of the etymology*), but no one has figured out what creature gave rise to the fossil

The pattern is a remarkably regular repetition of clustered hexagons in a honeycomb pattern. The hexagons are of different sizes (several millimeters), but always the same size in a given trace. In addition to the creature being unknown, no one knows what the creature is doing. Is this a series of foraging burrows? Is it a trap for food? Is it a clonal colony of many organisms, or the creation of just one?

The SEPM Society for Sedimentary Geology has an excellent abstract on the formation and preservation of examples found in Triassic and Jurassic rock in Iran. They postulate that the recovery of these from deep-water sites reflects a preservational selection, because they would only be saved where erosion is minimal, sedimentation prominent, and bioturbation negligible.

The best account of an attempt to discover the causative organism is in an article at Natural History Magazine. During exploration of the black smokers of the Mid-Atlantic ridge, patterns were seen on the sea floor virtually identical to paleodictyon, but obviously of recent creation. Interesting details at the link.

* the -dictyon suffix is from the Greek for "net" or "network" (thanx, pom)