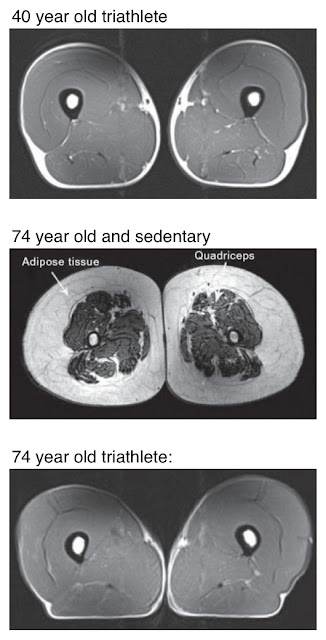 Relatively few researchers have looked at how the muscles of masters athletes – individuals who exercise routinely – decline, or don’t, as they get older. To look at this cross-section of society, Wroblewski and his team took muscle and body composition measurements of 40 high-level recreational athletes.

The subjects, 20 men and 20 women, ranged in age from 40 to 81 years and practiced their sport, primarily running, biking and/or swimming, four to five times per week.

The results showed that mid-thigh muscle mass and lean mass did not increase with age. But it didn’t decrease either. And, the older athletes seemed to maintain their muscle mass even though their body fat increased, relative to the younger competitors in the study.

These observations suggest that body fat was accumulating in places other than within the muscles, which is better for maintaining muscle strength. Tests on the subjects’ quads strength also showed that it did not decline with age either.


Addendum:  Reader Ran has made an important observation re the above set of images.  The second one - "74 year old and sedentary" - appears to show a shrinking of the muscle mass (and perhaps a lessening of femoral density).  However, a different web page, maintained by the University of Florida Muscle Physiology Laboratory, has this identical image, with the following explanatory caption:


"Cross-sectional T1 weighted MRI of the thighs from an obese elderly subject. Note the high amount of fat (in white) surrounding the small amount of muscle (in dark) due to sarcopenic obesity."

The important data are the actual measurements of the muscle mass (or the muscle cross-sectional area) of the second image.  The abstract of the original article indicates that the study by Wroblewski showed no loss of thigh muscle mass in "masters athletes."  Their study did not include untrained subjects, but rather compares their results to "the common observation that muscle mass and strength decline as a function of aging alone."

I would agree with reader Ran that inclusion of the second image is misleading.