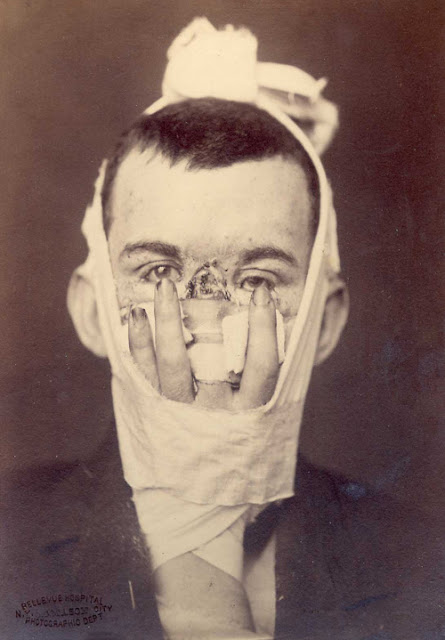 Rhinoplasty. Loss of nose due to an injury, and replacement by a finger in 1880. Surgery by Dr. E. Hart, photo by OG Mason, both of Bellevue Hospital, NY.

Those who view grafts as modern medical techniques will be surprised to note that this photo dates from 1880.  I haven't found any details re the procedure or followup images, so it's not clear to me whether the goal here was a simple skin graft over the gaping wound, or whether there was hope that some of the finger bone could be incorporated into a semblance of a nose (as implied by the caption).

Found in the Otis Archives - the "unoffical home for public domain photographs from the National Museum of Health & Medicine."  Via Sutured Infection.

Addendum:  A hat tip to Dr. C, who found an article in the Annals of Surgery from 1910, detailing this technique with a similar case and illustrating the surprisingly good cosmetic result.  In that case, the phalangeal bone was in fact incorporated into the new nose (after removal of the nail matrix to prevent its regrowth).

Addendum:  And a second tip of the surgical cap to Marge, who offers this excerpt from an article in Plastic and Reconstructive Surgery, citing a description of plastic surgery of the face in fourth-century Byzantium:


"We must first create a square defect around the original defect. We then extend the superior side of the square, the one over the forehead, towards the nose and towards the ear in a distance much greater than the side of the square. In the same manner, we extend the opposite side, the one over the brow, thus, finally we create an H design centered around the original defect.

After creating the H, we undermine the skin towards the edges of our initial lines (creating a medial and lateral flap), advance the two flaps, to join together in the area of the square defect and suture them (without tension), in order to maintain their blood supply. During the undermining, we should not just undermine the skin because it will necrose if it is too thin, but we should include some flesh (subcutaneous tissue) with the skin. We can use the same technique for defects on the forehead, cheeks or dorsum of the nose. If the defect is down to bone, we can use the same technique but before bringing the flaps together, we should abrade the exposed bone (debride) in order to avoid failure of the flaps."