St. John and the poisoned chalice 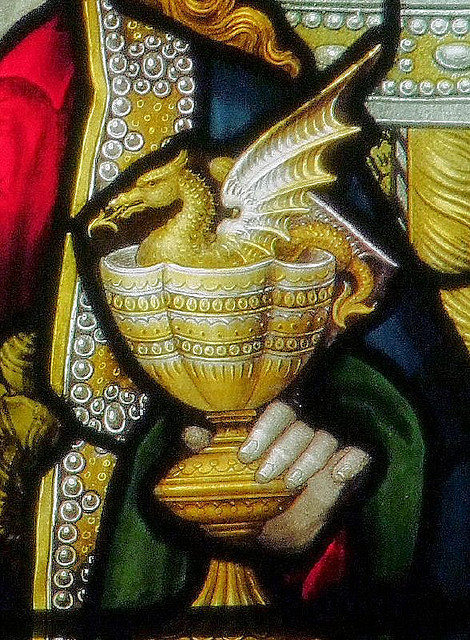 A detail from a stained glass window in Bardney, depicting St John holding a chalice containing a dragon or salamander:

Saint John the Evangelist is depicted holding a chalice, an allusion to his being put to the test by the high priest of the Temple of Diana at Ephesus. The high priest said to him: "If you want me to believe in your god, I will give you some poison to drink and, if it does not harm you, it means that your god is the true God." Thus the picure shows Saint John making the gesture of blessing which was to neutralize the poison escaping from the chalice in the form of a small two-headed dragon. He was then able to drink the potion, according to the legend. The story was popularized through the Golden Legend of Jacobus de Voragine, but was inspired by the words of the Gospels. In St. Matthew, Jesus says to St. John and his brother: "You shall indeed share my cup." And in St. Mark's Gospel, the risen Christ sends his apostles out into the world promising them, among other things, protection against poison: "Faith will bring with it these miracles . . . if believers drink any deadly poison, they will come to no harm."