A lobster as big as a small child 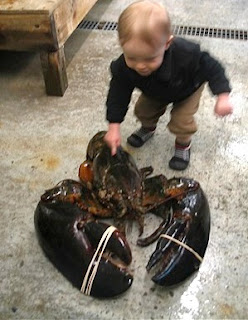 
The 40-inch male crustacean, about the size of a three-year-old child, was freed in the waters of the Atlantic Ocean, said Elaine Jones, education director for the state's Department of Marine Resources...

The lobster was caught near the seaside village of Cushing and brought to the Maine State Aquarium in West Boothbay. The state restricts fishermen from keeping lobsters that measure more than 5 inches from the eye to the start of the tail...

The marine lab has no record of a larger lobster being caught in the state, she said. The world's largest recorded lobster was a 44-pounder caught off Nova Scotia in 1977, according to the Guinness Book of World Records.