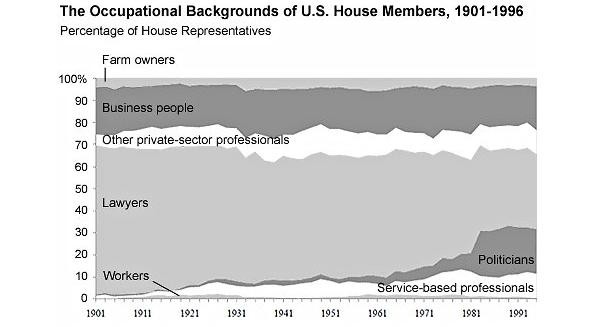 My post several days ago entitled Why does the U.S. elect so few scientists ? elicited quite a few thoughtful comments, including some strong opinions and several contrasts/comparisons with legislative bodies in other countries.  I was particularly interested in a link Dave provided to a Washington Post Wonkblog article from earlier this year, which included the time-based graph embedded above.

I only briefly glanced at the primary source material, which examines this postulate -


There are good reasons to suspect that policymakers' occupational or social class backgrounds have important consequences for their choices in office—and, as a result, for policy outcomes and for the balance of power between various social classes in the United States. To date, however, scholars of American politics have almost entirely neglected this topic...

- but several aspects of the graph are interesting.  It appears that the House has fewer lawyers than a century ago, primarily because of the rise of career "politicians," defined at the link as "political consultants, political party officers, public policy analysts, public relations persons and lobbyists."  The "private sector professionals" are comprised of accounts, actors, advertising execs, doctors, engineers, radio/television people, and morticians (!) among others, and the "service-based professionals" include college professors, ministers, social workers, teachers, and librarians.  The "workers" in the nearly-invisible bottom gray portion are laborers and soldiers.

I suspect most of these subcategory occupations date from the earlier years of the century and that the U.S. House of Representatives has become much less heterogeneous in recent decades.


Any attempt to cite the "founding fathers" and the governance of this country at its inception is fraught with difficulty and borders on irrelevance, but the concept of people leaving their day job for a couple years' sabbatical to help run the country seems to be appealing in concept, if impossible in implementation.

Finally, the argument that the purpose of the federal government is to make laws, and that therefore the component members should be lawyers, I find to be particularly unappealing.

Enough from me.  Time to move on to something more enjoyable.  Dilbert.