Can you guess who wore this remarkable dress? 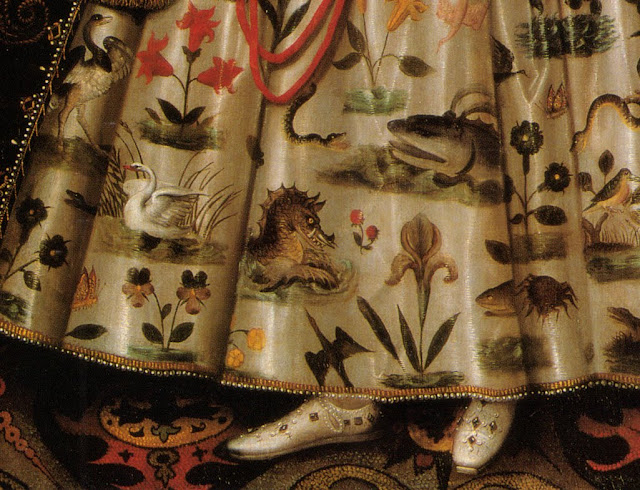 Ponder for a moment, then peek beneath the fold...

You're viewind the bejeweled feet of Elizabeth I beneath a skirt depicting a variety of wonders of the natural world.  The full portrait is stunning: 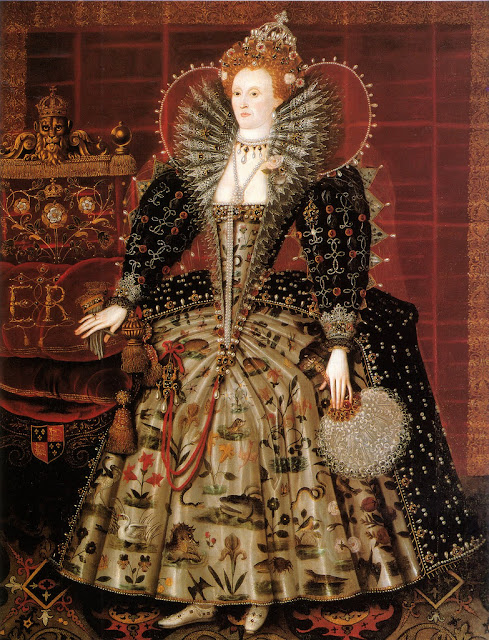 The painting is credited to Nicholas Hilliard, and dated 1599-1600.   I found it at Large Size Paintings, which also has seven other closeup images of various parts of the painting.

Related:  The Sieve as a Symbol of Virginity.

Paintings of this era incorporated a lot of symbolism in what appears to modern viewers to be simple adornments and details.  I wonder whether the natural history items in her skirt have a social, historical, or religious context.  I don't have time to look this up (or other information re the painting) this morning, so I'd be appreciative of anything readers here can offer from their knowledge or searching skills.

Addendum:  A tip of the crown to Liz, who offers this additional information:


We also know who embroidered the skirt. That's the Hardwick portrait, which Bess of Hardwick commissioned Hilliard to paint. Bess was the second most powerful woman in Britain at the time, who reached her position through a series of ambitious marriages and a phenomenal business sense (she's a fascinating person to read about; Mary S Lovell's book is particularly good). The painting is still on display at Hardwick Hall.

Bess was also a needlewoman of enormous skill. For a while, she was a keeper of Mary Queen of Scots, and they worked together on the Oxburgh Hangings, many of which are still on display at Oxburgh Hall in Norfolk (some are at the Victoria and Albert museum in London). Oxburgh is a beautiful place which is well worth a visit just for the hangings; they're lovely things quite apart from their historical value, and the room the hangings are in is never very busy. Many more of Bess's textiles are also on display at Hardwick, which is one of my favourite stately homes in the UK.

Back to that skirt, though. Bess's new year's gifts to the Queen were always lavish, and were frequently made up of very fine clothing, much of which she'd worked herself. There's a good record of them in her papers. The dress in this picture is one of them.