Has your child had her "babyccino" today ?

It's all the rage in Brooklyn...


Brooklyn’s obsessive coffee culture is rubbing off on the borough’s youngest cafe-goers, with tots ditching their bottles and juice boxes in favor of “babyccinos” — mini decaf cappuccinos or frothy cups of steamed milk and foam.

Moms and dads in neighborhoods like Park Slope, Fort Greene and Prospect Heights are ordering the small, foamy, surprisingly grown-up beverages for their pint-sized offspring. And the kids are asking for refills. 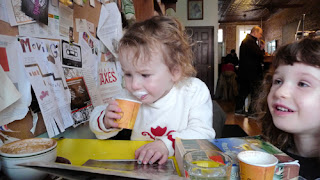 “Our children love babyccinos!” said Eric Worcester, who ordered the milk-only variety for his kids, Evelyn, 5, and Shirley, 2...

Babyccino is hardly a scientific term, with some shops and customers using the word to describe a macchiato-like beverage featuring a shot of decaf espresso topped with steamed milk and froth, while others use it to describe steamed milk with foam on top and a touch of cinnamon. Baristas around the borough say they get requests for both versions of the drink.

The trend started in Australia about a decade ago with milk-only babyccinos and quickly became the bane of many a barista’s existence, according to Aussie coffee expert Paul Caligiore.

“They interrupt workflow, create milk wastage and can be served at a dangerous temperature to a vulnerable consumer,” said Caligiore, who despite his misgivings about the drink plans to begin selling the world’s first instant babyccino. “Babyccinos have become so popular in Australia it would be difficult to find a cafe that doesn’t have them on their menu.

The trend spread to England and the internet, with YouTube serving as a popular repository of videos of parents making the beverage for their kids. Fans of babyccinos say the drink’s popularity has surged in Brooklyn over the last few months...

The rest of the story is at The Brooklyn Paper, via New York magazine.