Shot towers. And a donkey. 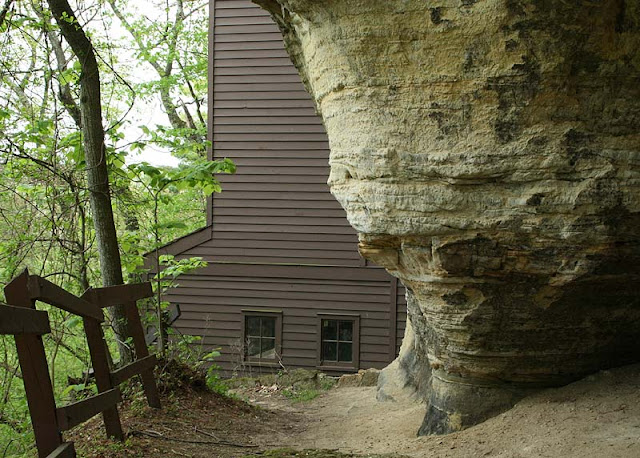 After preparing the post below this one, I decided it would be useful to briefly review what a "shot tower" is.  As an example, we'll use the one shown above, at Tower Hill State Park in Wisconsin.  In the early years of settlement, ores containing lead were discovered in the southwestern part of the state.  Lead was a valuable commodity - especially in wartime - and mines proliferated (miners who lived underground were nicknamed "badgers" - a term which later was incorporated into the identity of the state).  Shipping heavy lead ore to distant locations for processing was difficult and expensive, so efforts were made to refine and process it locally.  The production of shot for weapons was achieved through the use of a shot tower.


Shot towers harness the effects of surface tension on liquids in free-fall, a technique developed in 1782. Molten lead can be poured through a strainer at the top of a tower or shaft. The droplets become spherical as they fall and cool in this shape during their descent. The pellets are caught in a water basin to break their fall and finish cooling.

In 1830 a businessman from Green Bay, Wisconsin named Daniel Whitney was traveling along the Wisconsin River and recognized a sharp bluff near the town of Helena as a promising location for a shot tower. Lead deposits had recently been discovered in several locations around Iowa County. From the top of the bluff there was a 60-foot (18 m) sheer drop, below which the sandstone cliff sloped down to the riverbank, 180 feet (55 m) below the clifftop.

The size of shot that can be produced depends on the height of the tower, since droplets forming larger shot need more time to cool and thus a greater distance to fall.  Cold air in the tower can be used to shorten the needed distance.  Shot towers began to become obsolete with the development of a newer method:


A more modern method, called the Bliemeister method, does away with the expensive-to-build shot tower. In this method, droplets of molten lead actually fall only about an inch into a tank of hot water, roll across an incline plane and then continue falling through hot water for another 3 feet or so. Water temperature is used to control the rate of cooling, and surface tension brings the lead droplets into a spherical form.

For those interested, the single best source I know of is this Popular Science article, posted at Google Books.  It is extensively illustrated with photographs and schematic diagrams. 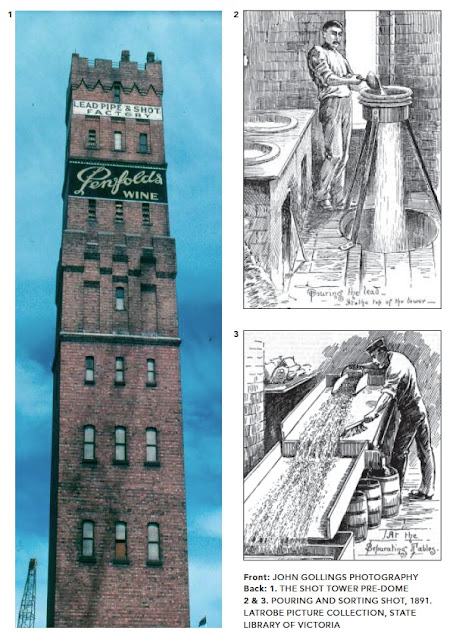 Next, (and unrelated to shot towers), this photo - 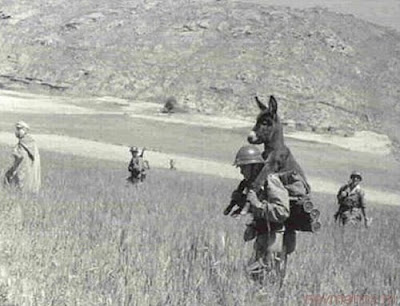 - will illustrate (but not totally explain) the phrase "... a remote mountain landscape, where sometimes even the ass goes on a man’s back."

I've seen this photo many times over the years, but have never found an definitive identification of the location, or an explanation of why the soldier is carrying a donkey.  (Via whyismarko, where the photo was used in 2008 for a caption contest - with entertaining results).

And finally, "saffian" is a term for Morocco leather, made from goatskin, and traditionally dyed with sumac.

Addendum:  Found the explanation re the soldier with the donkey at Snopes:

"The picture actually dates from 1958, during the Algerian War (i.e., a war for independence waged against French forces in Colonial Algeria). And it depicts a starving donkey that was rescued by a member of the French Foreign Legion who carried it back to his base, where the animal was nursed back to health, given the name “Bambi,” and adopted as a unit mascot — as described by author Douglas Porch in his 1991 history of the Legion."