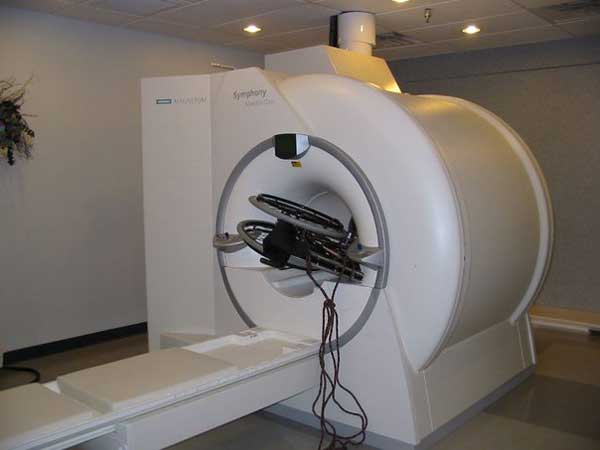 Prompted by a story at Nothing To Do With Arbroath, I did a quick search for MRI-related photos and stories.  The best collection of photos I found was at a story entitled "MRI Sucks" at the curiously-named Impacted Nurse website.

The most interesting text was in a New York Times story:


The police officer whose pistol flew out of his holster and shot a wall as it hit the magnet. The sprinkler repairman whose acetylene tank was yanked inside, breaking its valve and starting a fire that razed the building...

The magnets are never off, even at night, and cutting the electricity will not affect them. They draw most of their power from [contain] supercooled helium, which must be vented to shut down the magnet - a process that takes several minutes and has hazards of its own...

The roughly 10,000 scanners in the United States are found not just in hospitals, but in storefront clinics and even mounted on trucks, making rounds of small hospitals or parking at malls to do scans for a fee...

Most modern surgical staples, artificial joints, cardiac stents, pacemakers and such are made of titanium, stainless steel or other nonferromagnetic metals. But at least one patient died when a 15-year-old metal aneurysm clip on an artery in her brain was dislodged, and two adults with early-model pacemakers died during or shortly after scans...

Shrapnel and machine-shop debris can also cause problems. In the 1990's, one patient was blinded in an eye when a metal sliver in it from an earlier accident moved. Unexpected items, from foil-backed nicotine patches to tattoos with iron oxide ink, present risks.

Scanners can also pose a danger during emergencies. In Freiburg, Germany, a fireman fighting a blaze elsewhere in the hospital was sucked into the scanner's bore by his air tank. Folded in half, with his knees pressed into his chest, he nearly choked to death.

For emergencies, the scanners have so-called quench buttons that expel the liquid helium.... It erupts in a frigid blast, expanding 760 times, and can injure anyone near the vent.

More at the link, which was published in 2005, so may be partially out-of-date.