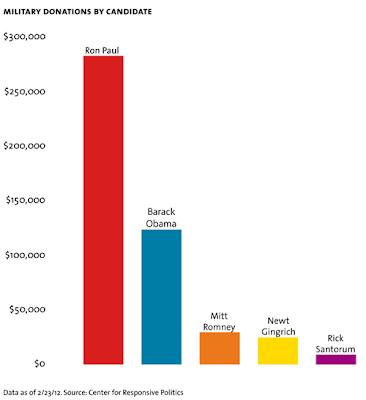 
The lion's share of political contributions by servicemembers and defense industry workers is going to anti-war, "soft on Israel," also-ran candidate Ron Paul. In fact, the battle for their dollars isn't even close: Paul has raised at least $282,868 from individual active-duty servicemembers and Pentagon employees—more than four times what the other three Republican presidential candidates have raised, combined...

Soldiers tend to see Paul as understanding the pressures they face better than the other candidates because he's the only one in the group who served in uniform, as a flight surgeon in the Air Force and Air National Guard during the Vietnam era...


Meanwhile, Paul's support from defense contractor employees—who donated more than $177,000 to him in 2011—has outpaced that of his competitors... That may seem downright counterintuitive.

There's further discussion at the link, where a second graph showing contribution per service sector has a visually inverted legend.