A medieval crossbow used as a surgical instrument 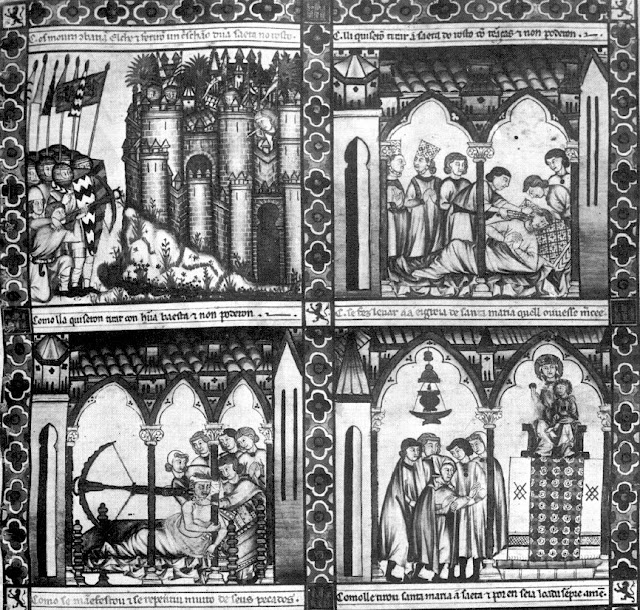 The Elche episode shown in our illustration probably belongs to the definitive conquest of Murcia kingdom, tributary to Castile, by the combined forces of Kings James and Alfonso in 1266. The panels read like a comic strip, from left to right, down the page. The first picture shows a Muslim crossbowman hitting a citizen or possibly a commoner knight-any townsman who could maintain horse and equipment at his own expense. The bolt has taken him frontally in the neck, just below the right ear; short and heavy, it would have looked either triangular or square if seen in cross-section, with its tip an equilateral triangle when viewed from the side. Note the crossbow in the picture, the osmosis of military fashion in both armies, and the distinctive palms of Elche.

In the second panel a body of surgeons attends the gentleman in his affluent home surroundings. Apprehension marks his face, as the senior surgeon applies forceps to draw the bolt. Perhaps lodged in bone, the bolt resists all efforts, but bleeding results.

By panel three the medical men are resorting to a final expedient. The patient's head is bound, probably to staunch the bleeding; his disarrayed clothing suggests the ordeal he has been through; his countenance, swollen by now, betrays deep suffering; and he is clinging to a pillar of his house. A crossbow has been attached to another pillar, its cord connected with the bolt, seemingly by a forceps arrangement. Two physicians hold the patient's head in position, one supplying absorbent bandages under the wound. Obviously they plan to fire the embedded projectile in reverse, dislodging it by main force.

Panel four shows the poor fellow, now much the worse for wear but firmly attached to his bolt, his case abandoned as hopeless, making his doctors help him to a nearby Marian shrine. The final panels [not embedded] portray his prayerful confession and his cure, while asleep, at the hands of the Virgin and her two attendant angels.

Text and image from a 1972 article in the Bulletin of the New York Academy of Medicine, which has quite a bit more discussion re the use of the crossbow as a weapon and regarding the medieval attitude about embedded foreign bodies (whether to leave in place or extract).

Via Uncertain Times and Medievalists.net.