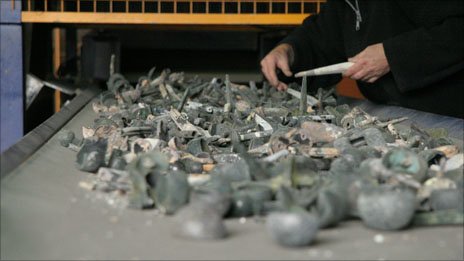 From a report at the BBC:


In 1997, Gabriels and Verberne founded OrthoMetals. Fifteen years later the company recycles more than 250 tons of metal from cremations annually...

The company works by collecting the metal implants for nothing, sorting them and then selling them - taking care to see that they are melted down, rather than reused. After deducting costs, 70-75% of the proceeds are returned to the crematoria, for spending on charitable projects.

"In the UK for example," he says. "We ask for letters from charities that have received money from the organisation we work with in the UK and we see that the amount we transferred to them has been given to charity. This is a kind of controlling system that we have."..

In Verberne's native Holland, some 57% of all bodies are cremated. Britain is the biggest cremator in Europe with 73%. And since the Catholic church eased its opposition to cremation, the company has seen growth in places such as Italy and Spain. In all, it operates in 15 countries.

The article emphasizes that the hips are recycled as scrap metal, not reused as hip implants again, and I congratulate the Dutch company for their efforts to see that the proceeds go to charity.  But... the cynic in me wonders if with this kind of price discrepancy -

- that there must be less ethical crematoria that harvest metal implants and sell them into the grey market for reimplantation, perhaps in third-world countries where new prosthetic joints would be prohibitively expensive.

The story also reminds me that when I arranged for my father's cremation twenty years ago, I was tempted to ask the crematory staff what would be done with my father's gold tooth fillings (he probably had several ounces).  In the end, I didn't inquire - but suppose those teeth were yanked before cremation and went into some staff member's pocket.