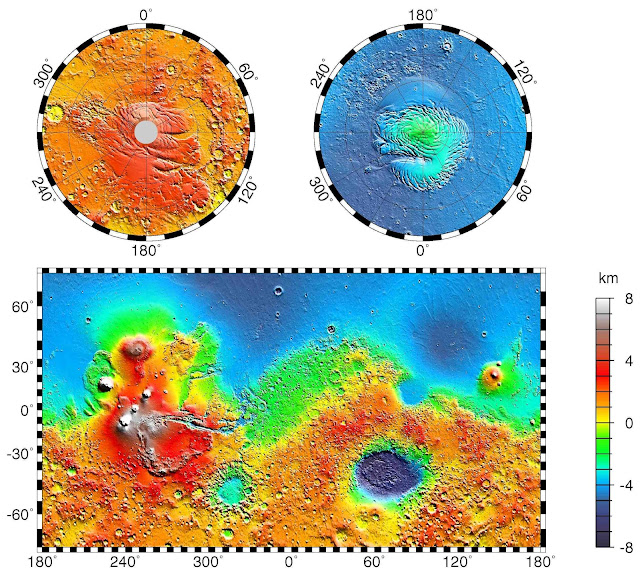 A fascinating thread at Reddit AskScience began with this question:


How do we measure mountains on Mars without a level for zero? Ie, our sea level.

This first answer didn't help much -


You're right, there is no sea level but it is still useful to have a standard height against which to compare geographical features. So we arbitrarily defined a level which we call "zero elevation." This is called the Martian datum, and is defined as the height at which the atmospheric pressure averages 6.105 mbar at 273.16 K.

- until the terminology was explained:

Then, using that level, topographic maps can be colorized as shown in the embed above, described as "stereographic poles and a 70-70 Mercator projection which together show the whole surface." [so I think the circular polar-centered views show only the "caps" area beyond 70 latitude, not entire hemispheres.]

In any case, they reveal the "Martian dichotomy":


"The two hemispheres differ in elevation by 1 to 3 km... The northern lowlands comprise about one-third of the surface of Mars and are relatively flat, with occasional impact craters. The other two-thirds of the Martian surface are the highlands of the southern hemisphere. The difference in elevation between the hemispheres is dramatic. Because of the density of impact craters, scientists believe the southern hemisphere to be far older than the northern plains.

If the top embed isn't enough eye candy for you, try exploring this Google Map of Mars.