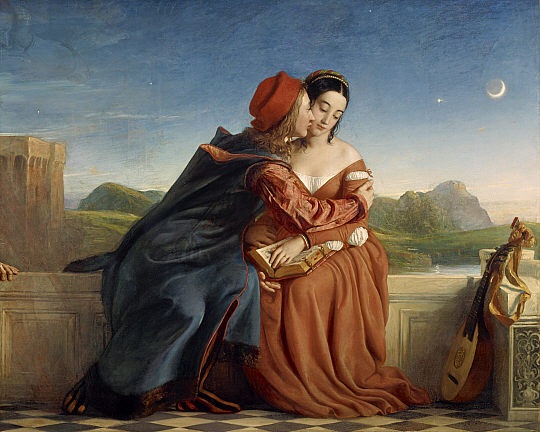 From the collections of the National Galleries of Scotland, the above painting by William Dyce (1806-1864), with this explanation:


Dyce acknowledged this as one of the finest paintings he produced in Edinburgh. Its subject was inspired by the ill-fated lovers described by Dante in his epic poem 'The Inferno'. Francesca, married to an elderly and deformed husband Giancotto, read to his younger brother Paolo and they fell in love. Giancotto surprised the lovers and murdered them. He was originally included in Dyce's composition. A hint of the tragic outcome is still suggested dramatically by the presence of Giancotto's disembodied hand at the left, a fortuitous result of the canvas trimmed to remove damage in 1882.

Personally, I like it with the disembodied hand barely entering the frame; it seems even more ominous this way.  I'm glad for the explanation, because otherwise I would never have known what's being portrayed.

I can't very well post a painting of Francesca da Rimini without also posting at least part of Tschaikovsky's symphonic fantasy of the same name.  Here's Part I of III -

- with a) the composer's program notes at the top in grey, b) insightful comments by the YouTube uploader in brown, and c) selected excerpts from the poem in dark brown at the bottom.  For me, the most musically memorable portion starts at about 5:20.

- because I like the music where the storm  returns at 6:15.