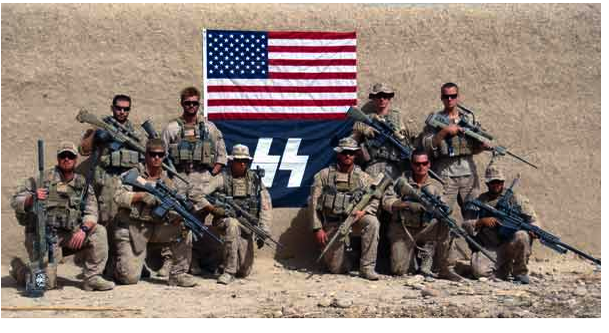 Excerpts from a story at The Atlantic's Wire column:


Marine Corps officials say the Marines who posed with this Nazi SS flag did so because they had no idea those distinct S's were Nazi symbols, they just thought it was a neat font they could use to represent sniper scouts, the Associated Press's Julie Watson reports. "I don't believe that the Marines involved would have ever used any type of symbol associated the Nazi Germany military criminal organization that committed mass atrocities in WWII," Camp Pendleton spokeswoman Maj. Gabrielle Chapin told Watson. She summarized Chapin's explanation as the Marines making a "naïve mistake." The Marines will not be punished.

Right.  And if there are ten more U.S. Marines who are unfamiliar with the "SS" symbology, they can read about it here.

Addenda:
1)  A U.S. military base in Afghanistan is called "Aryan" (photos and copies of supporting military documents at the link).

2)  There is an interesting essay by a former U.S. Marine Corps scout-sniper, which begins as follows:


This is in reference to the recent article on Fox news re: USMC Scout-Snipers and the SS flag.

My name is Kent Gooch.  I was a USMC scout-sniper and Scout-sniper instructor from 1979-1989 as well as a US Army National Guard sniper instructor from 1995-1998.  I have also written articles on the subject for multiple US magazines, co-wrote a book “The Military and Police  Sniper” and conducted Police and Military competitions and training here in the US and Austria.

I am writing to tell you that the Shutzstaffel “SS” symbol has a deeper meaning than the USMC is aware of.  The USMC spokesmen at Camp Pendleton have no idea of what they are talking about and the Marines that are using it aren’t probably even aware of the history of the “SS” usage, particularly with the 1st Marine Division Scout –Snipers, which is where it started.

This whole thing started with the Neo-Nazis led by Tom and John Metzger of Fallbrook, California in the 80’s.  There were a few Marines at 1st Reconnaissance Battalion who were active with the neo-nazis.  One of them was pretty well known as a recruiter...

Those interested can read the rest at the link.