Excerpts from a story at The Wall Street Journal:


On Sunday night, the British singer-songwriter Adele is expected to sweep the Grammys. Three of her six nominations are for her rollicking hit "Rolling in the Deep." But it's her ballad "Someone Like You" that has risen to near-iconic status recently, due in large part to its uncanny power to elicit tears and chills from listeners. The song is so famously sob-inducing that "Saturday Night Live" recently ran a skit in which a group of co-workers play the tune so they can all have a good cry together...

Twenty years ago, the British psychologist John Sloboda conducted a simple experiment. He asked music lovers to identify passages of songs that reliably set off a physical reaction, such as tears or goose bumps. Participants identified 20 tear-triggering passages, and when Dr. Sloboda analyzed their properties, a trend emerged: 18 contained a musical device called an "appoggiatura."..

An appoggiatura is a type of ornamental note that clashes with the melody just enough to create a dissonant sound. "This generates tension in the listener," said Martin Guhn, a psychologist at the University of British Columbia who co-wrote a 2007 study on the subject. "When the notes return to the anticipated melody, the tension resolves, and it feels good." Chills often descend on listeners at these moments of resolution. When several appoggiaturas occur next to each other in a melody, it generates a cycle of tension and release. This provokes an even stronger reaction, and that is when the tears start to flow. 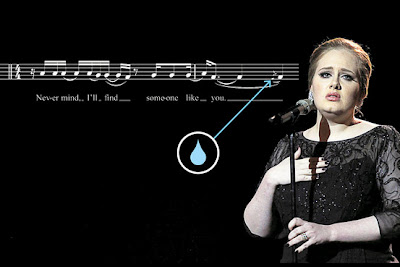 "Someone Like You" is a textbook example. "The song begins with a soft, repetitive pattern," said Dr. Guhn, while Adele keeps the notes within a narrow frequency range. The lyrics are wistful but restrained: "I heard that you're settled down, that you found a girl and you're married now." This all sets up a sentimental and melancholy mood. When the chorus enters, Adele's voice jumps up an octave, and she belts out notes with increasing volume. The harmony shifts, and the lyrics become more dramatic: "Sometimes it lasts in love, but sometimes it hurts instead."

When the music suddenly breaks from its expected pattern, our sympathetic nervous system goes on high alert; our hearts race and we start to sweat. Depending on the context, we interpret this state of arousal as positive or negative, happy or sad.

Further details at the Wall Street Journal, including audio files to illustrate the point.

Addendum:  Apparently the definition of appoggiatura is not as straightforward as the WSJ article indicates.  NPR has a further discussion of this topic (hat tip to Dan Noland for the link).