Gasoline: $5 per gallon this year ?

From a story in the Los Angeles Times:


U.S. motorists have seen the national average for regular gasoline rise above $3.50 a gallon in just three different years, but it has never happened this early.

The national average hit $3.523 a gallon, the Energy Department said Monday, up 4.1 cents from a week earlier. Analysts said the early price shocker is likely a sign that pain at the pump will rise to some of the highest levels ever this year... 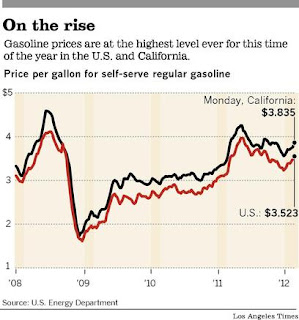 "There's a chance that the U.S. average tops $4 a gallon by June, with some parts of the country approaching $5 a gallon."..

This time, the dubious milestone was hit weeks before prices usually rise because of refineries typically shutting down for spring maintenance, and weeks before the prices rise again when states switch from less expensive winter blends of gasoline to more complicated and more expensive summer blends...

There are plenty of reasons for the high prices, and lots of reasons to expect a big price surge in the spring, said Tom Kloza, chief oil analyst for Oil Price Information Service.

"Early February crude oil prices are higher than they've ever been on similar calendar dates through the years, and the price of crude sets the standard for gasoline prices," Kloza said.

In addition, several refineries have been mothballed in recent months, he said, and some of those refineries "represented the key to a smooth spring transition from winter-to-spring gasoline."

Few things put the brakes on the U.S economy more effectively than rising gasoline prices.  Factor in the Israel/Iran tension and this being an election year in the U.S. - should be interesting.