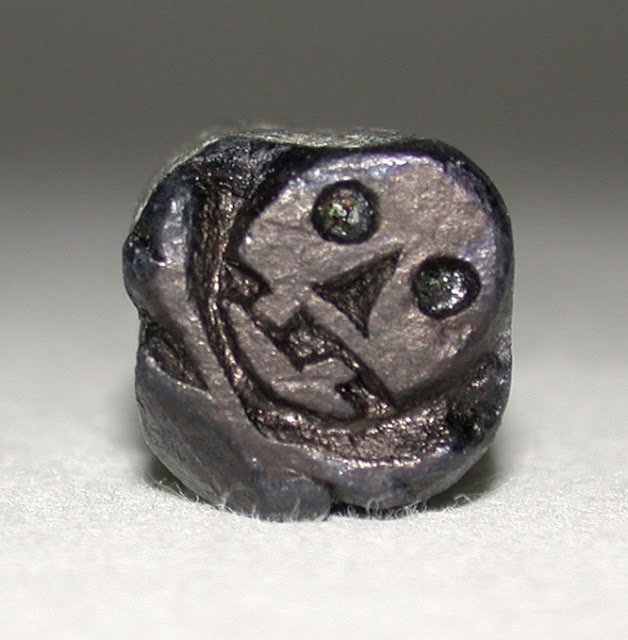 So to speak.  I originally posted the image above as a contest to guess what it is:


It's certainly a representation of a skull.  For what purpose?  A functional item, or an objet d'art?  If it's art, of what era/style?  Jewelry - from when?  Toy/game - which one?  European, American, Asian, Incan?  Your grade will be based 1/3 on era (century), 1/3 on geography (continent) and 1/3 on use/purpose.

But it turned out to be too easy.  Ponder the photo for a moment to see what you would have guessed, then look beneath the fold for the answer...

The first correct answer arrived within about ten minutes, from ChiMusicGuy:

The Smithsonian correctly describes this as a "fancy cancel" handstamp.  You can see some nice examples at this philatelic retail site (you will also notice that such cancels can render otherwise unremarkable stamps rather pricey).

I had thought that most fancy cancel handstamps were made of cork; this one was apparently crafted of lead.  From the looks of it, it originally was a skull and crossbones, though the latter seem to have been smooshed underneath by repeated use.

An example of a more conventional handstamp is this one, recovered from the sunken USS Oklahoma.

p.s. - I intentionally mislabelled the url of the photo with the words "dungeons dragons figure" in an effort to mislead those who would "cheat" by mousing over the image.  Didn't work.