This eleven-year-old Yemeni girl ran away from home to escape a forced marriage. She eloquently explains why.

Here's the story from National Yemen:

Nada’s story goes back to when she was only two years old. At that time, her uncle, who lives alone with his mother, had expressed to her parents his wish to adopt her in which they agreed. And so Nada lived with her uncle in the capital city, Sanaa, and didn’t hear from her real family until about a month ago when they asked to see her. “They told my uncle that they wanted me back. He couldn’t do anything about it; they’re my parents. So he took me back to them.” Nada explains. 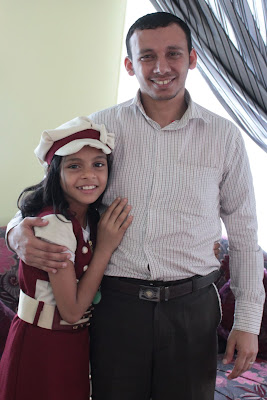 Being back with her parents after 9 years of separation was so difficult on Nada. The estranged girl was getting very uncomfortable with the different and, as she expressed, “bad” environment there in which everyone, including children, was just chewing Qat and smoking shisha all the time. When Nada tried to express her wish to go back to her uncle, she was shocked with the news that she was getting married. “They told me that I am engaged and that my fiance had already paid them money and brought the engagement ring. They said that I couldn’t leave and even threatened to kill me if I went back to my uncle.”..

After her uncle learned of what had happened, he went and took her from Hodeida back to Sanaa. Later on Nada and her uncle discovered that her parents have issued a statement that their daughter had been kidnapped by her uncle. “They said that my uncle kidnapped me but it’s not true, I am the one who ran away.”
“I want to continue my education and live my life. I have many dreams, I don’t want to be married now. My mother hates me, she just wants me to get married because she will get money from the man. But I’m not an item for sale, I’m a human being and I would rather die than get married at this age."...
Nada is now waiting in hopes that journalists, human-rights activists and different local organizations will help her make a strong case against her parents who are trying to get her back so they can go on with the marriage process. “I want to thank all the journalists, activists, and organizations that have shown their support to me and hope that they will help me in my case so I can succeed and continue to live my childhood.”

The video has garnered over two million views in the last couple days; it deserves more, if for no other reason than to shatter the preconceived notions that most Westerners have about third-world schoolgirls.