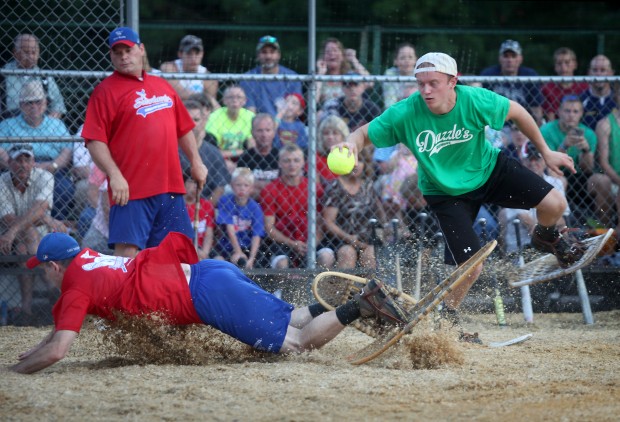 At Snowshoe Park, the infield is covered in pine wood chips from a local lumber company, and athletes routinely stumble around the base paths in their 36-inch-long, wooden Bear Paw snowshoes...

The game has been played here [Lake Tomahawk, Wisconsin] for 52 years, bases are 55 feet apart instead of the traditional 60 feet, and which team scores the most runs rarely matters. The crowd topped 2,000 for the July 4 game but averages 1,200 to 1,500 on any given summer Monday night. Admission is free, but a butterfly net is passed during the game to help offset costs and raise money for local nonprofits.

“This is not about hardcore competition,” said Craig Holmquist, 39, a pitcher for the Snowhawks who has been playing snowshoe baseball for eight seasons. “It’s our community playing together. It’s not about winning.” Some of the crowd arrived two hours before game time.

The early birds came for two reasons: to throw blankets over sections of bleachers so they’d have a good seat for the game and to make sure they don’t miss out on a piece of pie, which can sell out 30 minutes before the 7:30 p.m. game time.

More details at the Wisconsin State Journal, and an enjoyable, brief, video at this link.