Eastern Tailed-Blue (and a linkdump) 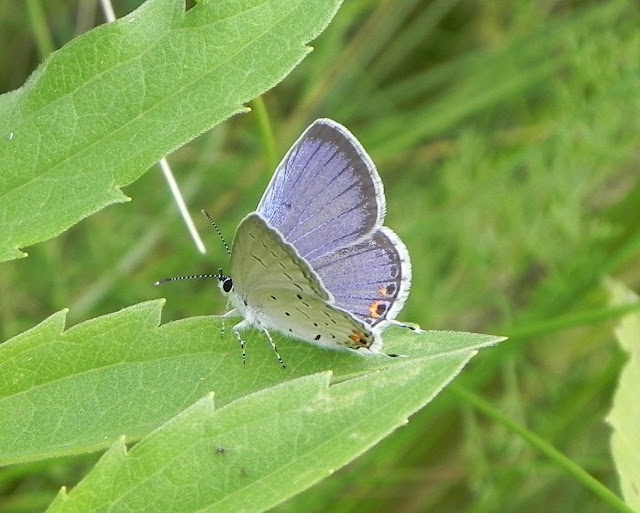 After a fist fight, a soccer referee stabbed a player to death.  So the player's friends and family "rushed into the field, stoned the referee to death and quartered his body.  Local news media say the spectators also decapitated Silva and stuck his head on a stake in the middle of the field."

Use this link to find out what words you can spell with your telephone number.

If you have a few minutes, read the post at Neatorama about North Sentinel Island - "the forbidden island" - whose inhabitants "are members of a hunter-gatherer tribe that has lived on the island for 65,000 years."  The Indian government protects these people by not allowing visitors to access the island.

In 1989 a passenger airliner crashed in Niger.  Families of the victims have created a stunning memorial in the desert.

A Reddit thread discusses "What is a book that once you finished, you just sat there in awe of what you just read?"  The most-upvoted entries are not surprising.

An explanation of how swallowing parasites might help patients minimize the effects of auto-immune diseases like multiple sclerosis.

How polluters can "game the system" of carbon credits.

Video of cliff-diving monkeys (doing so obviously just for the joy of it).

"Researchers at the University of Tennessee at Chattanooga decided to poll and interview non-believers to find out what kind of people abandon religious faith and why. Based on this research, the project authors were able to divide non-believers into six basic categories."

Telephone area code 321 in Florida received those numbers because they are the final digits in the countdown of a space launch.

Video of the Northern Lights, filmed in Scandinavia.

A Calvin and Hobbes documentary is coming to movie theaters and video-on-demand.

An instructable shows how to quickly create a mini-cake by stacking three doughnuts and covering them with frosting.

Possibly the worst ceremonial opening pitch of a baseball game.  Ever.

You can read the transcript of the astronauts of Apollo 10 discussing who among them was responsible for the fecal turd found floating through the air of the spacecraft.

The fastest lawn mower in the world is a Honda version that goes from 0 to 60 mph in four seconds.

Moose are dying in Minnesota.  "The population has nosedived in recent years, dropping to about a third of what it was in 2009. In the past year alone, their numbers plummeted 35 percent, leaving only about 2,700 moose. That’s a mortality rate unseen anywhere else in North America—in fact, in other parts of the continent, moose are thriving. But something, or a combination of somethings, is threatening to wipe out moose from the North Woods in less than a decade, if the current decline continues unabated."

I like this new pope.  "When Pope Francis embarked Monday morning for Brazil, where he will take an official week-long tour, he raised eyebrows around the world by carrying his own bag up the stairs to his flight out of Rome... Francis is seeking to demonstrate humility and a closer connection to regular Catholics, as well as signaling to other Vatican officials that they could stand to behave a bit less like royalty and more like priests."

Browse the 1963 Sears Toy Book (and be amazed at the prices).

Text and video about a young woman who vacationed in Peru and wound up with maggots in her brain.  "Rochelle said she remembered walking through a swarm of flies when in Peru and a fly had got inside her ear. But once she had shooed it away she thought nothing more of it."

How to make your own ice-cream sandwiches.

Jill Harness has created for Mental Floss a compilation of 62 of the world's most beautiful libraries.

Find out what names people in the Middle Ages gave to their dogs and cats.

The word "shitstorm" has an antonym.  I'll save you the click:  "candystorm."

You can make your own fabric softener at home.

Thumb drives are not eternal.  Lifehacker discusses how to minimize the chances of crucial data loss.

Few people know that "harpaxophilia" means "sexual arousal from being robbed or burglarized. The word comes from the Greek word ἅρπαξ, harpax, “robber” and -philia, “love”.

Photo: The Eastern Tailed-Blue is a common butterfly in the Upper Midwest, one of about a dozen types in the Blues subfamily.   I photographed this fresh and strikingly pretty one this afternoon at Badger Prairie Park in Verona, Wisconsin.