Results of a butterfly field trip 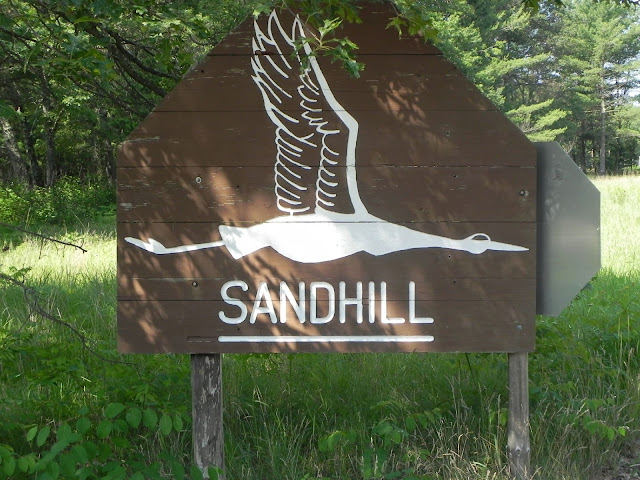 Here are several not-perfectly-composed-or-focused photographs taken on a field trip this past weekend to the Sandhill Wildlife Area - a 9,000 acre site managed by the Wisconsin DNR.  The habitat varies from forests to sandy uplands (one with a herd of American bison) to marshes and flowages. 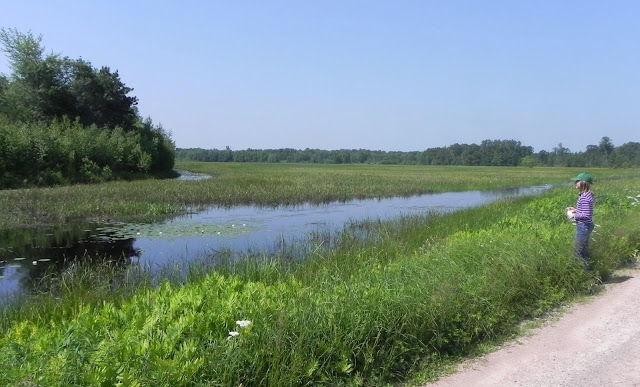 I was one of a group of eleven butterfly enthusiasts who spent about five hours exploring the area.  We didn't need to venture farther than the roadsides to find butterflies such as this Acadian Hairstreak - 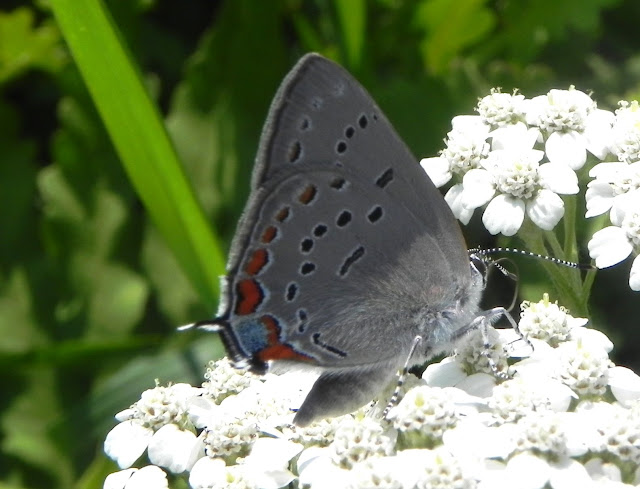 - and its relative, the Coral Hairstreak (similar, but note the orange spots and the absence of a tail). 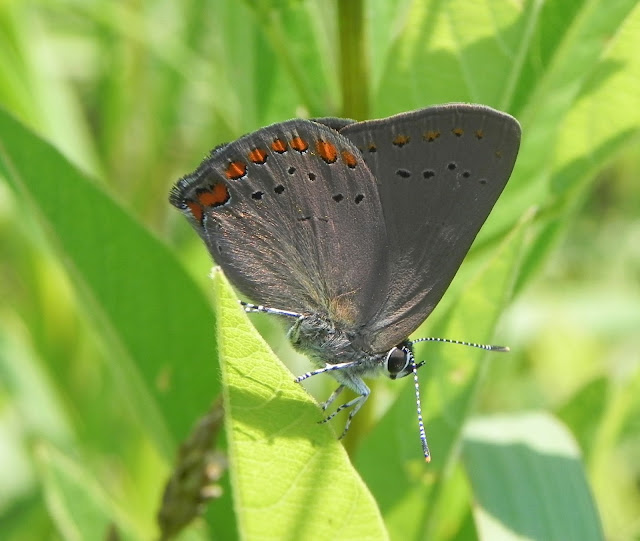 Also Edwards' Hairstreaks, Banded Hairstreaks, and Striped Hairstreaks. In all, about 150 butterflies of 33 different species were seen, including Sulphurs, Coppers, Fritillaries, Checkerspots, Admirals, Buckeye, Wood-satyr, Monarchs, and six kinds of Skippers, such as this Two-Spotted one: 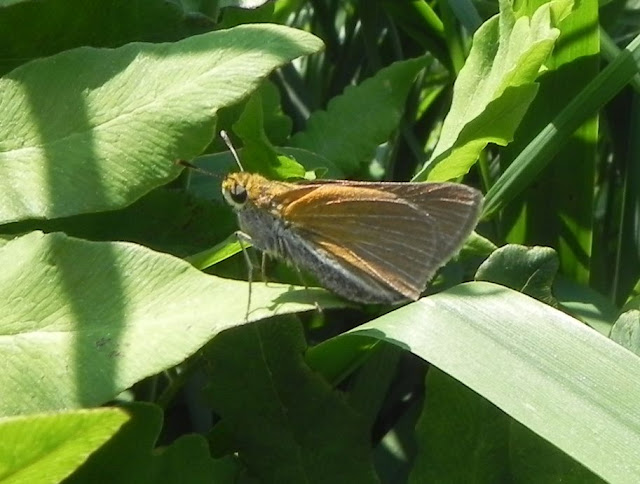 My favorite was one I encountered on the way back to my car when I noticed a brightly-colored (almost wasp-like) butterfly on the road.  It was patiently probing with its proboscis into the sand in a process called "puddling" - needed by butterflies to extract minerals they can't derive from the nectar of flowering plants. 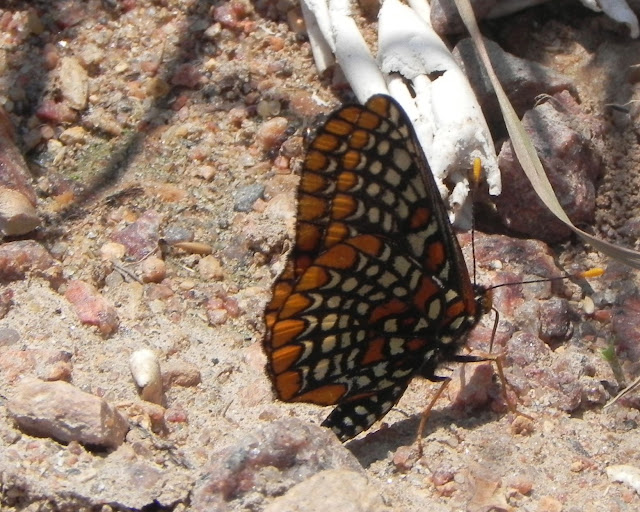 In their quest for salt and trace elements, butterflies will even land on humans, especially those with sweaty clothes.  I sat down next to this one and slowly moved my hand in front of him, and he hopped on, tasting the palp of my fingers.  This is a Baltimore Checkerspot. 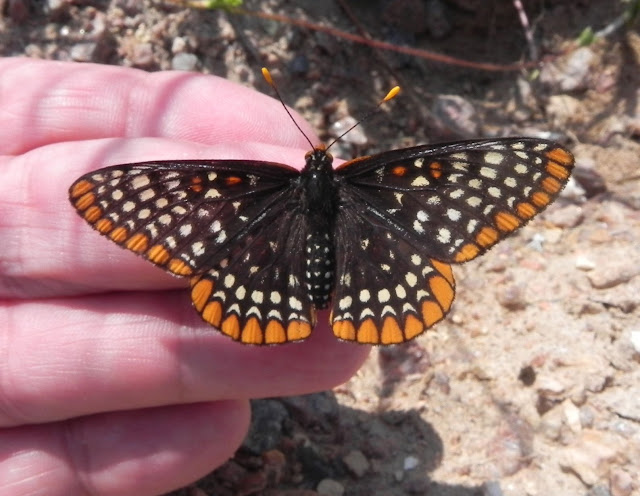 I learn something on every field trip.  On this one I found a magnificent caterpillar which I didn't recognize.  He had been actively browsing willow and was big - almost as long as my little finger - thus probably nearly ready to pupate.  I had willow available at home, so I thought I would bring this guy back to Madison to rear and release.  BIG MISTAKE!!!. 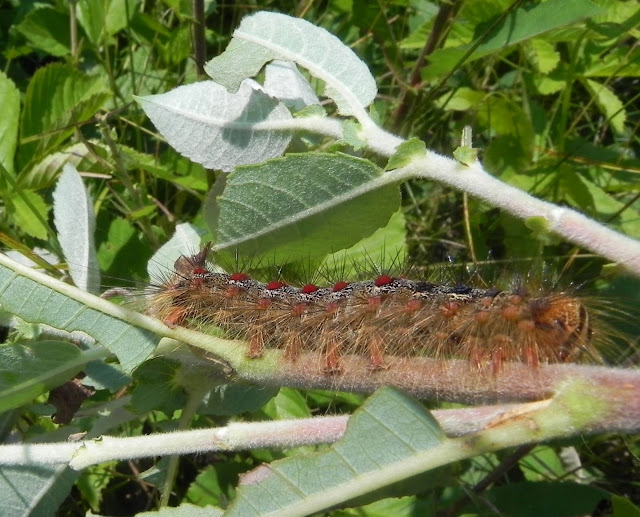 I was in the process of carrying him back to the car, and showed him to two of the people in the group, neither of whom knew what species he was.  But the third person was a forest ecologist (or forest entomologist, I forget which), and he with 100% assurance informed me that I had found the larva of a gypsy moth - a major, invasive, defoliating pest.

I think it's worth reminding readers about once a year that butterfly field trips are available to anyone.  You don't have to join any clubs and you don't have to know anything about butterflies.  Butterfly people are some of the nicest people you will ever hang out with, and they will welcome you to join them on walks.  Those in Wisconsin can check the website of the Southern Wisconsin Butterfly Association (a half-dozen more trips coming this summer - next week to a bog).  Those in other states should be able to find a local group by navigating the website of the North American Butterfly Association, or by checking with your local librarian (librarians know how to find stuff).