Wearing a bra might actually make your breasts sag.  At least that’s the conclusion drawn by Jean-Denis Rouillon, a professor at the University of Besançon in France. For the past 15 years, Rouillon has been diligently taking a slide rule and caliper to the breasts of 320 women, ages 18 to 35, to measure any changes, particularly the relationship of the nipple to the shoulder... 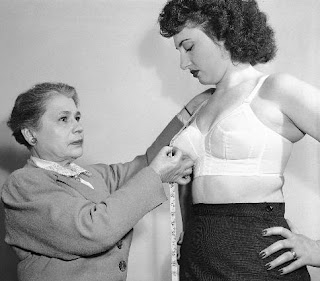 The sports science expert told France Info radio that “bras are a false necessity,” and that “medically, physiologically, anatomically — breasts gain no benefit from being denied gravity. On the contrary, they get saggier with a bra.”..

According to the French study, that “lift” allows ligaments that support breast tissue to become weak. Rouillon said that women who did not wear bras had, on average, “nipples [that] lifted on average seven millimetres in one year in relation to the shoulders,” according to an account in the Connexion, France’s English language newspaper. (That’s about a quarter-inch.) Thus, he concluded, breasts would gain more tone and be better able to support themselves if no bra was used...

Note the study has not yet been peer-reviewed.  More at the link.