A restaurant whistleblower - inspired by Snowden?

Excerpts from his "about" statement:


"...there serving maggot slap and fly trails with all you can eat advertisements!..... its been over a week now since this has been brought to corporate attention, I contacted the volusia county health dept..... they dont handle it.... they gave me a number and a persons name..... said to ask for them in person...... the operator didnt know who i was talkin about and didnt seem to care.......i placed an ebay "check out item # 121135647488" that made the owner call the police and tell on himself.....i was contacted by the port orange police dept for black mail....wtf...i made several detailed complaints with corporate golden corral.......i have met with the owner personally, he ownes 30 golden corrals in georgia and florida, he showed me pictures of his new golden corral vehicle wraps and explained he "thought this was a cash call" he explained his deep connections in law enforcement and explained "we could be opening ourselfs to a lawsuit" in a way i felt it to be threatning..... i have several texts with wesh 2 news..... i contacted abc cbs nbc and any other c's i could get post's to .... i went to news journal let them view it the video and pictures..... they didnt give a damn!.......i sent Dr Phil a message???????? it was his challenge!..... as of three days ago i left a message with the detective who contacted me about my ebay post....
Why is this restauraunt still open serving maggot smack and fly trialings to the people of Port Orange??
as you see the systemis failing us!!"

The Reddit thread has some salient observations.  One additional thought: since the restaurant responded this way to a scheduled inspection, does that mean that restaurants always know when inspections will be conducted?   So they only need to be compliant once/month or whatever?  Sounds like part of the blame lies with the inspecting authorities, not just the food establishments.

Addendum:  One of a set of four related photos - 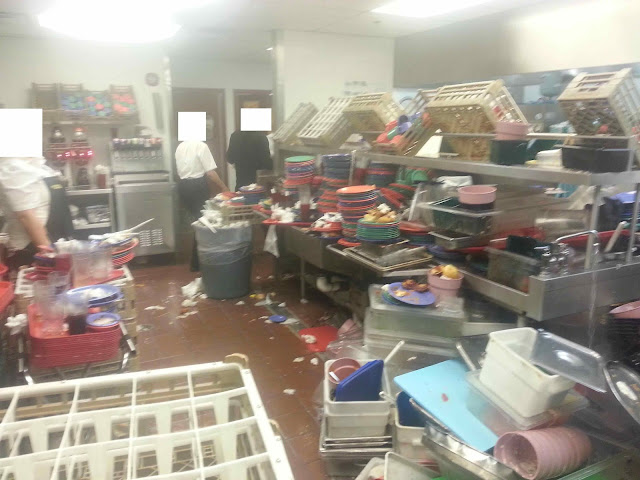