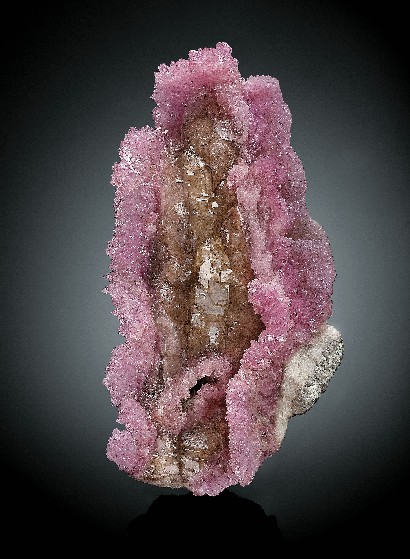 
La Madona Rosa (the Pink Madonna) is an exceptionally large and beautiful specimen of Rose and Smoky Quartz bearing a strong resemblance to traditional depictions of the Virgin Mary...

In late 1950s, miners working this small mine in Brazil, found a miraculous pocket of Rose Quartz: although only six inches (10-16 cm) wide and 12 inches (32 cm) high, the pocket extended for an amazing 16 feet (5 meters). It was filled with deep pink Quartz crystals draped sinuously over golden Smoky Quartz. The miners at Sapucaia (the mine's informal name because of its proximity to that town) had hit pay dirt: Rose Quartz crystals had never been seen before this discovery. Subsequent finds in Brazil also yielded Rose Quartz specimens (notably Lavra da Ilha and Alto da Pitora) but none approached the sheer size and beauty of the specimens from Lavra Berilo Branco - they are the "gold standard" for Rose Quartz. The most famous specimen from this historic find is The Van Allen Belt which currently resides in the Smithsonian.