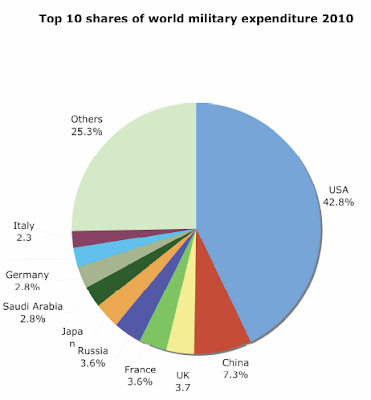 In all of the posturing and arguing about American "bankruptcy" and the need for economic restraint and the austerity and cutting the budget, I have yet to hear any leader in either party give one single speech about trimming military expenditures.

Data from the Stockholm International Peace Research Institute, via The Dish.

The increase in 2010 is almost entirely down to the United States, which accounted for $19.6 billion of the $20.6 billion real-terms increase. Excluding the USA, the total in the ‘rest of the world’ barely changed in 2010, increasing by a statistically insignificant 0.1 per cent...

Even in the face of efforts to bring down the soaring US budget deficit, military spending continues to receive privileged treatment. President Obama’s FY2012 budget announced a 5-year freeze on non-security-related discretionary expenditure, but military spending, along with other security spending such as intelligence and Homeland Security is exempt.