How something can be "east of the South Pole" 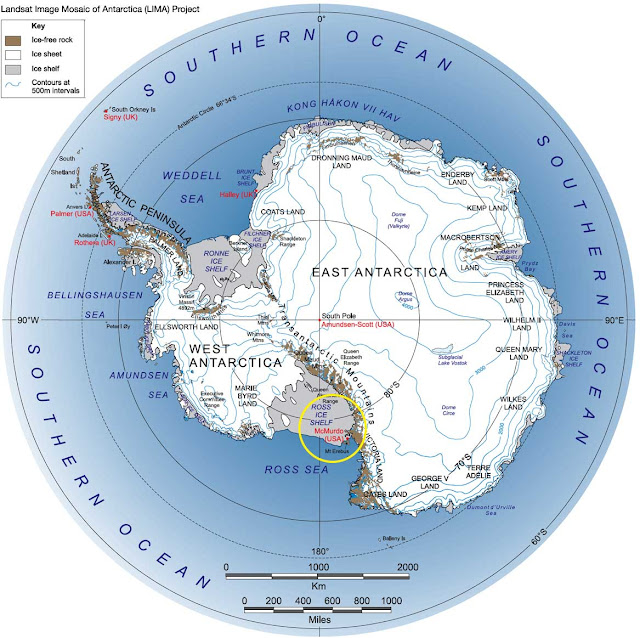 This post started when I read at Neatorama that the first photo of the planet Mercury showed an unusual crater near the south pole of the planet, with a smaller crater "to the west of" that one.  That brought to mind the old childhood puzzle expressed something like this:

The answer was "white" because the only place on earth where that set of directions would return you to your origin was the North Pole.  And, of course, if you were standing at the North Pole and wanted to describe the position of anything, it would be "south" - there not being a "southwest" or "southeast" from the pole itself.  (The Mercury crater described earlier could, of course, have been near the pole and the second one could be "west" in a circular fashion around the pole, but it sounded like a curious description coming from a NASA scientist).

So I Googled "east/west of the north/south pole" in all four combinations, and came up with quite a few hits.  Most of them referred to Antarctica, and many of them were in scientific publications.  The briefest answer to my question came in a reply to a letter-to-the-editor in the New York Times three years ago, when someone asked if everything wasn't by definition north of the South pole?


You are right, of course. The only direction one can go from the South Pole is north. But that is not very useful if you want to know where on a map of Antarctica to look for Dome Argus, the site of the observatory.

The prime meridian, which divides the world arbitrarily into east and west, cuts through Antarctica, similarly dividing it. Dome Argus is in East Antarctica, so it was a natural shortcut to describe it as ''east'' of the pole.

It appears there are two closely-related conventions used for Antarctica.  One is to use the prime meridian, and the other is to use the Transantarctic Mountains as arbitrary divisors for the continent.  You learn something every day.

I suppose similar conventions are used for extraterrestrial mapping.  I wonder who decides where the "prime meridian" is located on Mercury/Venus/Mars - and what about Jupiter or a giant gaseous planet where the visible features are always changing?