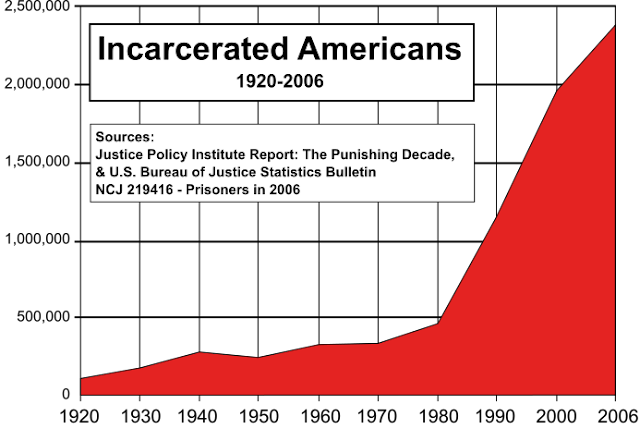 Offered in conjunction with an article in LA Progressive, which notes that "“More African American men are in prison or jail, on probation or parole than were enslaved in 1850, before the Civil War began.”


Growing crime rates over the past 30 years don’t explain the skyrocketing numbers of black — and increasingly brown — men caught in America’s prison system, according to Alexander, who clerked for Supreme Court Justice Harry Blackmun after attending Stanford Law. “In fact, crime rates have fluctuated over the years and are now at historical lows.”

“Most of that increase is due to the War on Drugs, a war waged almost exclusively in poor communities of color,” she said, even though studies have shown that whites use and sell illegal drugs at rates equal to or above blacks...

However change is to come, a big impediment will be the massive prison-industrial system. “If we were to return prison populations to 1970 levels, before the War on Drugs began,” she said, “more than a million people working in the system would see their jobs disappear.”