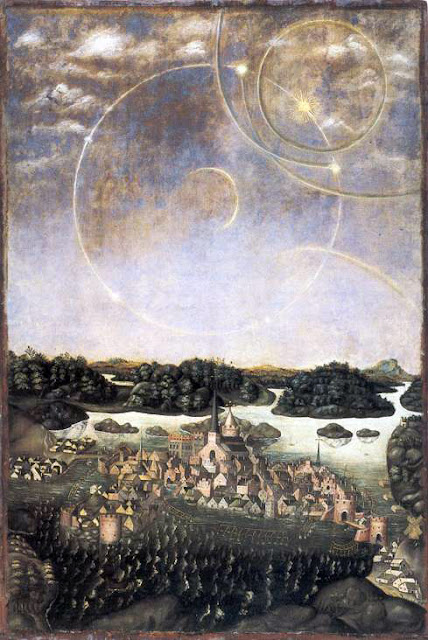 During this change of seasons, we've been noticing rings around the sun, as ice crystals in the upper atmosphere refract light to create halos or smaller sun dogs. The best online source I've seen on this topic is Atmospheric Optics, which has sections on sun dogs, moon dogs, rainbows, and other related phenomena.

The image embedded above is "Vädersolstavlan" -


...an oil-on-panel painting depicting a halo display, an atmospheric optical phenomenon, observed over Stockholm on April 20, 1535. It is named after the sun dogs (Swedish: Vädersol, "Weather sun") appearing on the upper right part of the painting. While chiefly noted for being the oldest depiction of Stockholm in colour, it is arguably also the oldest Swedish landscape painting and the oldest depiction of sun dogs...

The painting is divided into an upper part depicting the halo phenomenon viewed vertically and a lower part depicting the city as it must have appeared viewed from Södermalm in the late Middle Ages. The medieval urban conglomeration, today part of the old town Gamla stan, is rendered using a bird's-eye view. The stone and brick buildings are densely packed below the church and castle, which are rendered in a descriptive perspective (i.e., their size relates to their social status, rather than their actual dimensions). Scattered wooden structures appear on the surrounding rural ridges, today part of central Stockholm...

Over time, the painting has become emblematic of the history of Stockholm, and as such appears frequently in various contexts. The 1000 kronor banknote published in 1989 shows a portrait of King Gustav Vasa, based on a painting from the 1620s, in front of details from Vädersolstavlan. In the arcs of the parhelion is the microtext SCRIPTURAM IN PROPRIA HABEANT LINGUA, which roughly translates to "Let them have the Holy Scripture in their own language". This is a quote from a letter written by the king in which he ordered a translation of the Bible into the Swedish language...

More re the painting at Wikipedia. Those interested in parahelia might look at my old posts on sun halos and light pillars.