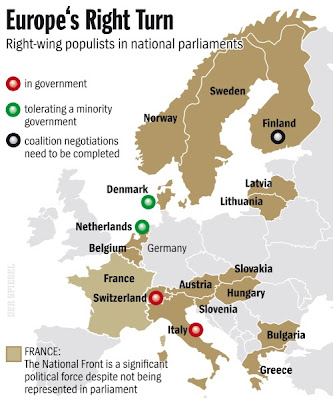 Excerpts from an article in Spiegel Online:


It is ironic that it is here in Finland -- a part of Europe that always seemed eminently European -- that a movement is now coming to power that inveighs against immigrants and abortions, considers Brussels to be the "heart of darkness" and rejects all financial assistance for what it calls "wasteful countries," like Greece, Ireland and Portugal. "We were too soft on Europe," says Soini, adding that Finland should not be made to "pay for the mistakes of others."..

The entire program to rescue the euro could be in jeopardy, because it has to be approved unanimously by the entire European Union. That includes both the anticipated aid for Portugal, the additional billions for the euro bailout fund and the planned reform of the fund...

The successes of right-wing populists could indeed exacerbate the smoldering euro crisis. Tensions between the wealthy countries in the north, who are contributing most to the bailouts, and the ailing debtor nations in the periphery already threaten to destroy the monetary union. If a European version of the American Tea Party movement develops, it could very well become the kiss of death for the euro...