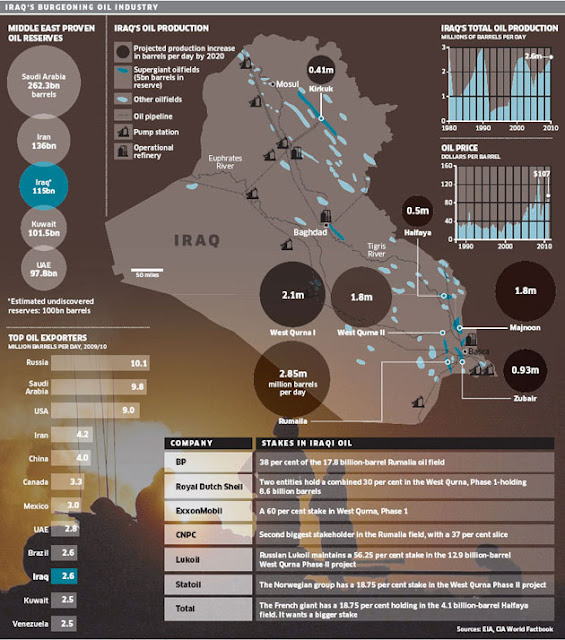 Not really a surprise, but better documentation than has been available before.  Excerpts from an article in The Independent:

The papers, revealed here for the first time, raise new questions over Britain's involvement in the war, which had divided Tony Blair's cabinet and was voted through only after his claims that Saddam Hussein had weapons of mass destruction...

The Foreign Office invited BP in on 6 November 2002 to talk about opportunities in Iraq "post regime change". Its minutes state: "Iraq is the big oil prospect. BP is desperate to get in there and anxious that political deals should not deny them the opportunity."

After another meeting, this one in October 2002, the Foreign Office's Middle East director at the time, Edward Chaplin, noted: "Shell and BP could not afford not to have a stake in [Iraq] for the sake of their long-term future... We were determined to get a fair slice of the action for UK companies in a post-Saddam Iraq."

Whereas BP was insisting in public that it had "no strategic interest" in Iraq, in private it told the Foreign Office that Iraq was "more important than anything we've seen for a long time".

BP was concerned that if Washington allowed TotalFinaElf's existing contact with Saddam Hussein to stand after the invasion it would make the French conglomerate the world's leading oil company. BP told the Government it was willing to take "big risks" to get a share of the Iraqi reserves, the second largest in the world.

Here's an example of the previous public posturing:


* Tony Blair, 6 February 2003: "Let me just deal with the oil thing because... the oil conspiracy theory is honestly one of the most absurd when you analyse it. The fact is that, if the oil that Iraq has were our concern, I mean we could probably cut a deal with Saddam tomorrow in relation to the oil. It's not the oil that is the issue, it is the weapons..."