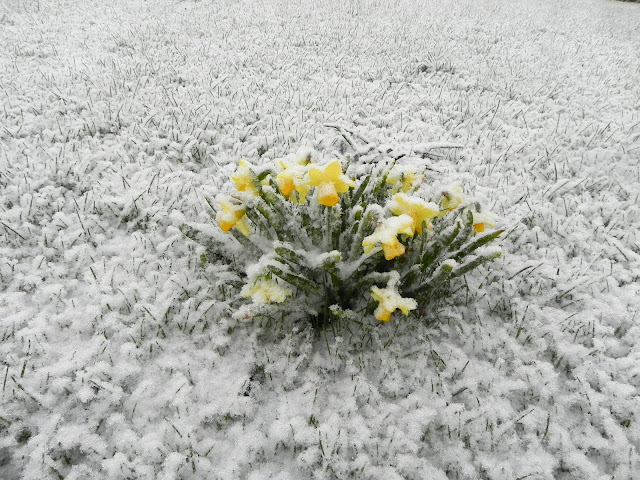 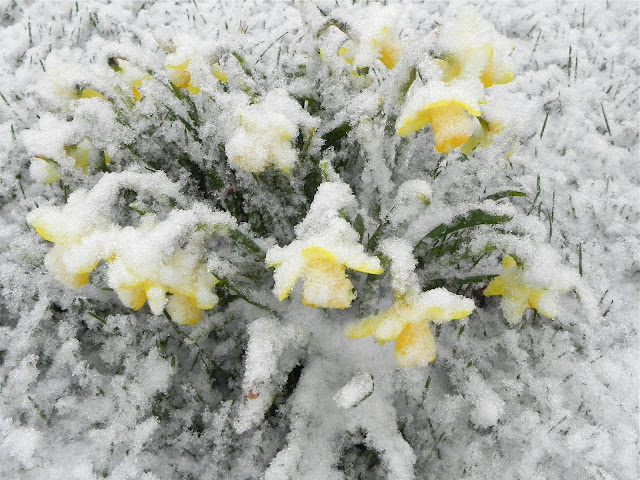 We planted these little guys by putting the bulbs under the turf of the front yard.  They came out on schedule, but Mother Nature had a little surprise for all of us this past week.  That prompted me to look up some information on the flowers.  From the Wikipedia entry:


There are two derivations of the name. One is that of the youth of Greek mythology called Narcissus, who, in at least one of many variations of the tale, became so obsessed with his own reflection as he kneeled and gazed into a pool of water that he fell into the water and drowned... the Narcissus plant first sprang from where he died.

The other derivation is that the plant is named after its narcotic properties (ναρκάω narkao, "to grow numb" in Greek)...

The name Daffodil is derived from an earlier "Affodell", a variant of Asphodel. The reason for the introduction of the initial "d" is not known, although a probable source is an etymological merging from the Dutch article "de," as in "De affodil."..

The name jonquil is sometimes used in North America, particularly in the South, but strictly speaking that name belongs only to the rush-leaved Narcissus jonquilla and cultivars derived from it. Flowers of the tazetta-group species Narcissus papyraceus are commonly called paperwhites...

All Narcissus varieties contain the alkaloid poison lycorine, mostly in the bulb but also in the leaves... On 1 May 2009 a number of school children fell ill at Gorseland Primary School in Martlesham Heath, Suffolk, England after a daffodil bulb was added to soup during a cookery class. The bulbs could often be confused with onions, thereby leading to incidents of accidental poisoning.

One of the most common dermatitis problems for florists, "daffodil itch" involves dryness, fissures, scaling, and erythema in the hands, often accompanied by subungual hyperkeratosis (thickening of the skin beneath the nails). It is blamed on exposure to calcium oxalate in the sap...

The daffodil is the national flower of Wales, where it is traditional to wear a daffodil or a leek on Saint David's Day (March 1).

In some countries the yellow variation is associated with Easter. The German for daffodil is Osterglocke, that is "Easter bell."