The Great Wall of Vietnam 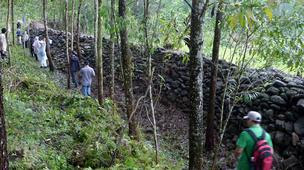 
"This is the longest monument [~200 km] in Southeast Asia," CNN.com quoted Professor Phan Huy Le, president of the Vietnam Association of Historians, as saying. The wall is built of alternating sections of stone and earth, with some sections reaching a height of up to four meters...

Construction of the Long Wall started in 1819 under the direction of Le Van Duyet, a high-ranking mandarin serving Emperor Gia Long, and it served to demarcate territory and regulate trade and travel between the Viet in the plains and the Hre tribes in the mountain valleys.

Today I found at the BBC another report, this time with a photo (above, copyright EFEO).  A quick search yielded a couple more low-resolution photos (here and here) -

From the looks of it, I would bet this wall was designed not so much as a military defense, but rather to funnel travelers and traders toward defined crossing points where tariffs could be collected, as was done where the Silk Road crossed the Great Wall in China.