Radioactive waste in the ocean 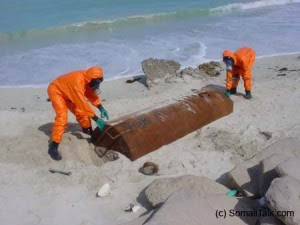 This week the press has given extensive coverage to a leak of radioactive water into the ocean in Japan.  I have not heard anyone mention the longstanding problem of the dumping of nuclear (and other) waste into the world's oceans, as exemplified by this article in Somaliland Press:


According to Mr. Mohammed O. Ali, the once clean blue-water coast off Somalia is littered with a toxic-waste calamity of health and environment hazards that has been dumped by Western chemical and shipping firms...

During the height of the Somali civil war, Swiss and Italian firms Achair Partners and Progresso, signed a secret agreement with the transitional government of warlord Ali Mahdi Mohamed. Taking advantage of the chaos and the fact that Ali Mahdi was desperate for arms and cash to oust rival General Farah Aideed– the European firms began to unload thousands of tonnes of toxic waste arriving in steel drums off the coast of Somalia. Some even made it to the mainland and were buried in 40 inches by 30 inches holes.

The main perpetrators are said to be Italian firms controlled by the mafia, whose job is to dispose Europe’s extremely hazardous waste. Locals also suspect German and Danish shipping companies are in the trade, with some contracted to transport thousands of tonnes of poisonous stockpile including 60, 000 hexachlorobenzene (HCB) barrels from Australia. They say, sometimes instead of taking the hazardous waste to Europe where it can be incinerated, they dump it in the Somali coast to save money and time and also they face strong opposition from Europe’s environmental action groups...

The United Nation has in the past said it has reliable information that European and Asian firms have been dumping uranium radioactive waste, lead and heavy metals such as cadmium and mercury off the coast of Somalia for the last two decades. The practice has infuriated many Somali fishing communities who took on the large foreign ships with their own fishing boats and small arms. Many fishermen hijacked ships demanding ransom to clean the coastline, this eventually led to the current piracy problem. They insist there was no one to safeguard the region so they had to take matters to their own hands.

Via Reddit.   Similar information is available at Project Censored:


Allegations of the dumping of toxic waste, as well as illegal fishing, have circulated since the early 1990s, but hard evidence emerged when the tsunami of 2004 hit the country. The United Nations Environment Program (UNEP) reported that the tsunami washed rusting containers of toxic waste onto the shores of Puntland, northern Somalia.

Nick Nuttall, a UNEP spokesman, told Al Jazeera that when the barrels were smashed open by the force of the waves, the containers exposed a “frightening activity” that had been going on for more than a decade. “Somalia has been used as a dumping ground for hazardous waste starting in the early 1990s, and continuing through the civil war there,” he said. “The waste is many different kinds. There is uranium radioactive waste. There is lead, and heavy metals like cadmium and mercury. There is also industrial waste, and there are hospital wastes, chemical wastes—you name it.”

Nuttall also said that since the containers came ashore, hundreds of residents have fallen ill, suffering from mouth and abdominal bleeding, skin infections and other ailments. “What is most alarming here is that nuclear waste is being dumped. Radioactive uranium waste that is potentially killing Somalis and completely destroying the ocean,” he said...

More at the link re these events and the genesis of Somali pirates.