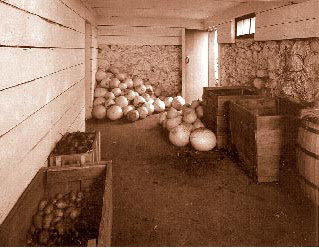 When my mother was growing up on a farm in rural Olmsted County, Minnesota, the farmhouse had a large root cellar, where vegetables were stored for the winter.  There was a large pile of sand in the corner, in which carrots were buried, and separate piles for potatoes.

In my childhood home in suburban Minneapolis thirty years later in the 1950s, we had good kitchen refrigeration (though no air-conditioning), but in addition to a refrigerator and storage freezer, we still maintained a de facto root cellar.  The basement was partitioned into a play area and a utility area which held the furnace and water heater; one corner of that unheated area was used for storage of potatoes, which we bought by the gunny sack.

Today I learned, from an article in the Wisconsin State Journal, that winter storage of vegetables may improve their sweetness -


"This is a phenomenon called cold-sweetening," says UW-Madison horticulture professor Irwin Goldman. As plants produce sugars through photosynthesis, most are combined and stored in the plant as starches and other large polymers. But in response to cold temperatures, some plants break down some of their energy stores into "free" sugars, such as glucose and fructose, and stash them in their cells to guard against frost damage. Sugar dissolved in a cell makes it less susceptible to freezing in the same way that salting roads reduces ice...

Cold-sweetening occurs in many cold-tolerant vegetable plants. Local consumers may have experienced it in Wisconsin-grown winter spinach, but it also happens in beets, broccoli, carrots and even potatoes.

In fact, Goldman says, cooks may find that cold-stored potatoes turn brown when cooked, due to caramelizing of the extra sugar. This can be avoided by moving cold potatoes to warmer storage areas to recondition them and allow the sugars to convert back to starch before cooking them.

The photo, from the Minnesota Historical Society, shows the large root cellar at the Oliver H. Kelley farm, a historical farm preserved for educational purposes.