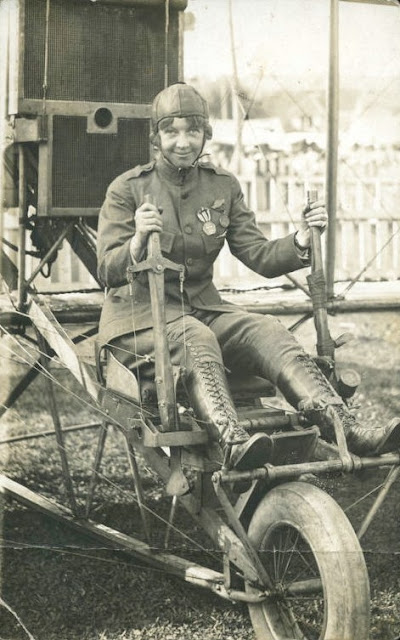 Bought her first airplane from Orville Wright in 1912 at age 21.  First woman to do a loop-de-loop.  First woman authorized to wear a uniform by the U.S. Military.
Found at My Ear-Trumpet Has Been Struck by Lightning, where there are additional photos.

Addendum (hat tip to Ninabi for finding this anecdote about her):

There are several versions of what happened next-one version of which put Dodger Casey Stengel in the plane to make the drop. But Law flew alone. When Robbie, the old Oriole-now 53 years old-caught the object he saw falling from the plane, he was splattered with warm juice from a grapefruit. The impact knocked him to the ground whereupon he exclaimed: "Help me, lads, I'm covered with my own blood."

Law explained in 1957 that she had forgotten the baseball back in her hotel room and when she discovered the situation it was too late to retrieve the ball. So she took a grapefruit from the lunch of one of the ground crew and dropped it instead.