The tragic death of Neda


For my final post tonight, I'm going to wade into territory that I'm only marginally familiar with, because of an item which will certainly be controversial.

Neda Agha-Soltan died during the protests against the Iranian government last summer.  She has subsequently become an icon in the ongoing opposition to President Ahmadinejad.  The circumstances and details surrounding her death are summarized relatively objectively on her Wikipedia entry and at the Los Angeles Times.


The state-television documentary suggests the video of Neda's dying moments merely depicted her pouring blood on her own face from a special bottle she was carrying. Later, the documentary alleges that 27-year-old Neda was shot dead in the car that was taking her to a hospital...

Neda is portrayed in the documentary as a foreign agent who became the victim of a plot orchestrated by foreigners and opposition supporters...

The documentary alleges that Arash Hejazi, the writer and physician who treated Neda as she lay bleeding on a Tehran street, as well as her music teacher who was with her at the protest, were members of a team that carried out the plot...

On January 6, Iran's ambassador to Bahrain, Hossein Amir Abdullahyan, told "The Nation" that groups from Britain and the United States infiltrated the opposition movement and carried out assassinations among its ranks.

The video above was posted this past week at Milwaukee's Examiner, where it is accompanied by a rather vehement diatribe.  PressTV is Iran's English language television network, so I assume this video segment comes from the documentary referred to by Radio Free Europe.

I've watched the video many times, and I'll admit it does look like she pours blood onto her face.  I don't agree that the bystander saying "squeeze it" is suspicious - he's probably telling the rescuers to compress the presumptive chest wound.  But I find the image of the left hand holding the ?bottle to be unusual because the position of the fingers suggest that the bottle is pointing from the bottom of the hand, which would be a most unusual orientation.  The photo of her bloody face is a little atypical for a penetrating chest wound in that blood exiting from the lungs would typically be foamy;  this seems to be "welling up" as an esophageal bleed would do.

I'm not taking a position; just posting the video for information and because "conspiracy theory" is always interesting.

Addendum:  I haven't been able to get this video out of my mind ever since I posted it, and I've suddenly realized what is inconsistent.  This screencap - 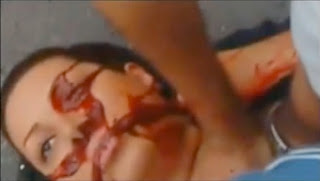 supposedly shows the blood after she poured it on her face.  But you can't pour blood like that - to have it IN the nosrils and NOT on the lips, nasal septum or outer edges of the nostrils.  That blood HAS to be issuing from inside the nose.  And from where the rescuers were applying pressure to her chest, I would guess the entrance wound was in the central sternum/mediastinal region, so she probably has a major vessel now communicating with her esophagus.  The "bottle" in her hand may have been 'shopped by authorities, or they are misinterpreting some other item.