I wonder how her face looked before it was adjusted 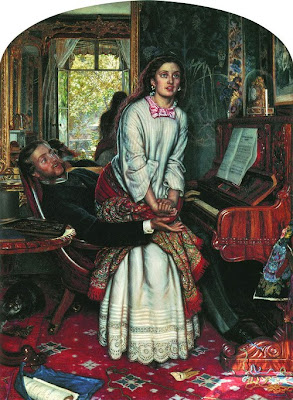 This 1853 painting by William Holman Hunt depicts a young woman rising from a man's lap - but there's more to the story:


Initially the painting would appear to be one of a momentary disagreement between husband and wife, or brother and sister, but the title and a host of symbols within the painting make it clear that this is a mistress and her lover. The woman's clasped hands provide a focal point and the position of her left hand emphasizes the absence of a wedding ring. Around the room are dotted reminders of her "kept" status and her wasted life: the cat beneath the table toying with a bird; the clock concealed under glass; a tapestry which hangs unfinished on the piano; the threads which lie unravelled on the floor; the print of Frank Stone's Cross Purposes on the wall; Edward Lear's musical arrangement of Tennyson's poem "Tears, Idle Tears" which lies discarded on the floor, and the music on the piano, Thomas Moore's "Oft in the Stilly Night", the words of which speak of missed opportunities and sad memories of a happier past. The woman's discarded glove and the man's top hat thrown on the table top suggest a hurried assignation. The room is too cluttered and gaudy to be in a Victorian family home; the bright colours, unscuffed carpet, and pristine, highly-polished furniture speak of a room recently furnished for a mistress.

Personally, I don't find it to be a particularly attractive or interesting painting, except for this next part of the story:


The look on the girl's face in the modern painting is not the look of pain and horror that viewers saw when the painting was first exhibited, and which shocked and repulsed many of the contemporary critics. The painting was bought by Thomas Fairbairn, a Manchester industrialist and patron of the Pre-Raphaelites, but he found himself unable to bear looking on the woman's expression day-to-day, so persuaded Hunt to soften it. Hunt started work but fell ill and allowed the painting to be returned to Fairbairn before he was completely happy with the result.

More at Wikipedia, via.