This is a "peruke head" 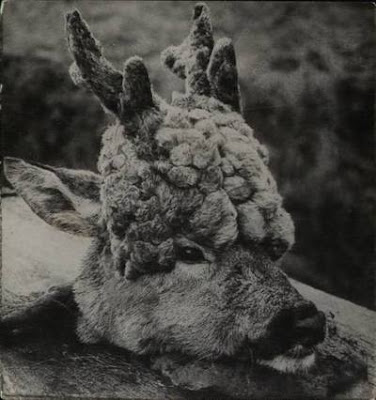 I found the photo without context at nrkn.  At first glance it looked like a joke photo with someone's knitting placed on the mounted deer head, but then I decided it must be some kind of proliferative growth.

A quick search led me to Shooting Times, which had an article about a "perruque head."  That suggested "peruke head" which would use the French term for a wig, which finally led me to an article at The Anchorage Press which described the condition in a moose:


Knobby's odd antlers are due to a “testosterone issue” - a hormone deficiency that was most likely caused by a birth defect. Knobby's condition, sometimes called “Peruke Head,” can also be caused by old age, which lowers testosterone, or by accidental castration...

Normally, when moose start growing back their antlers in summer, the antlers are covered in a velvet-like skin and are very fragile. When the antlers reach full size for the year and it's time for the rut, they harden and lose the skin.

Knobby's antlers have grown little by little every year, but they're severely deformed. His lack of testosterone means he doesn't have a trigger to tell his antlers when to fall off and when to harden. His antlers are continually soft. As Knobby trots around the city, he's constantly damaging them. Layers of scar tissue have grown over his injured antlers. They look like big, squishy knobs, hence his name.

So we wind up with a handy insult you can hurl at someone if you want to accuse him of behaving as though he were testosterone deficient.